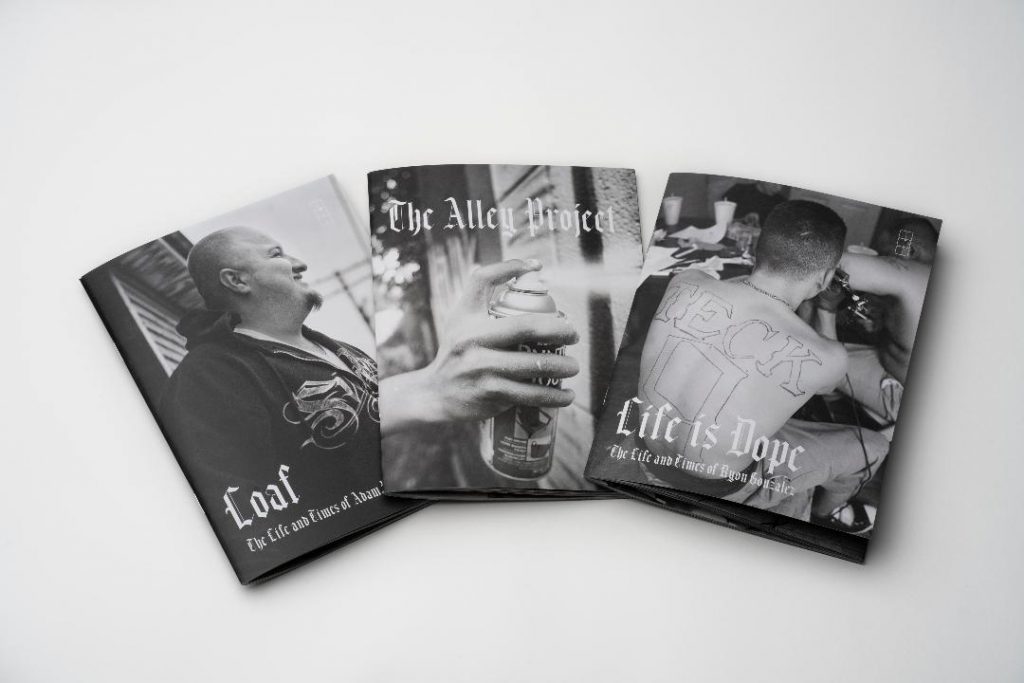 You’ve been working on this project for almost twenty years. How did it begin? – and can you speak about the difficulty of gaining the trust of your subjects? Had you felt in danger when working with them?

More difficult than earning their trust, was actually finding a graffiti writer. It took me about a year to find my way in, but once I did, things fell into place quickly.

On the issue of trust, early on, I caught on quickly to the value they placed on getting a good photograph of their finished pieces. This proved to be invaluable as we were still getting to know each other and gaining each other’s trust. Because of the temporal nature of their street-side pieces, the photographic document was as important to them as the actual painted wall. I caught wind of this early on, and began to clinically canvas the city, photographing every wall I could find. Besides sharing my digital copies with them, I made hundreds of prints and would bring them with me whenever I hung out with them.

Regarding personal safety and danger, I get asked this frequently, but rarely did I feel unsafe. Once we developed a relationship, I actually felt protected. I felt as though they had my back in any situation we encountered. The real fear for me was the Detroit Police and the trainyard bulls, who were prone to beating the hell out of anyone caught inside the trainyards they were hired to protect. I had some not-so pleasant encounters with the police in my youth, so any fears I had were mainly directed towards the proverbial “authority figures.” 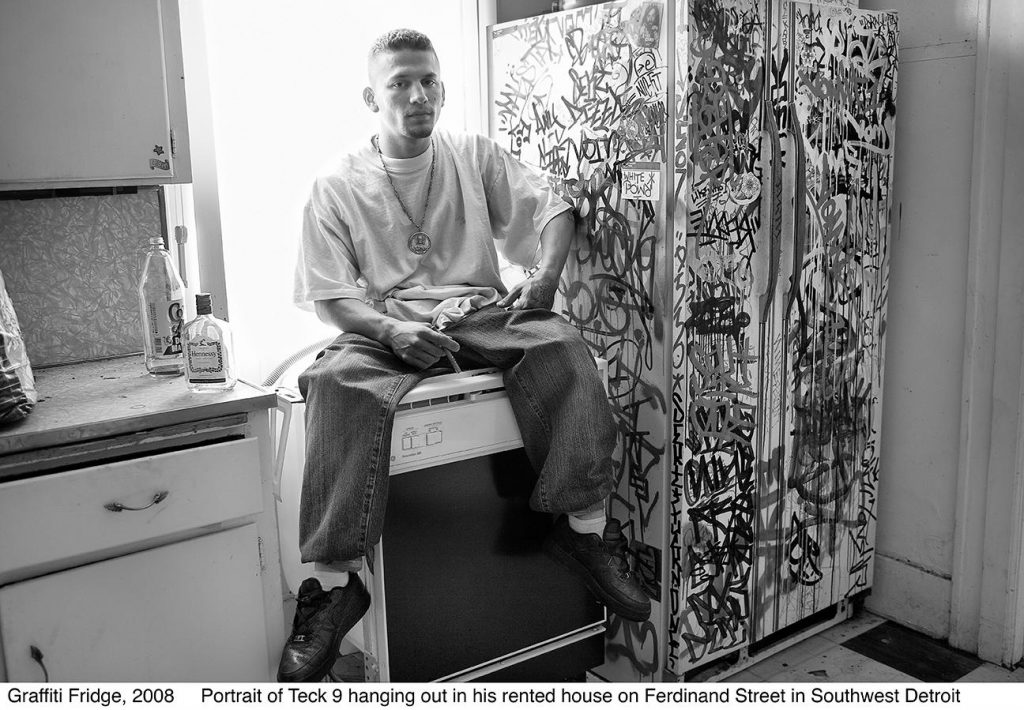 Can you talk about each specific zine, what differentiates each one?

In 2004, following a fluke encounter with a graffiti writer, I was invited to the home of a member of the FBSK graffiti crew in Southwest Detroit. There were two graffiti writers present, LOAF and TECK 9, and then Erik Paul Howard, a community activist that lived in the neighborhood. I would find out later, the purpose of that meeting was to size me up; to see if I was worthy of showing up in their neighborhood with my camera in tow. Erik was an aspiring photographer, so socially we both had a lot to talk about, and any issues of trust quickly faded. That meeting would become the foundation for everything that followed, including the publication of the zines.

The first zine, The Alley Project, is a brief history of the Falcon Street Alley in Southwest Detroit, better known in the neighborhood as TAP. Co-founded by Erik, TAP was, and still is, a vibrant network of places and programs along and near the alley, designed to support and facilitate the creative process, along with positive youth-adult partnerships. TAP ended up becoming a gathering place where everyone could meet.

There’s a feeling of community that provides a safe haven for young and inexperienced writers (Toys) from the neighborhood, as well as seasoned veterans (Kings) who acted as mentors to the younger writers. The Alley Project also allowed for similar mentor-mentee relationships that fit a wide variety of other interests, that besides graffiti, includes lowriding, art and photography to name a few. Aside from documenting graffiti culture, I would share my time as an adult mentor within the programs they offered to neighborhood kids. 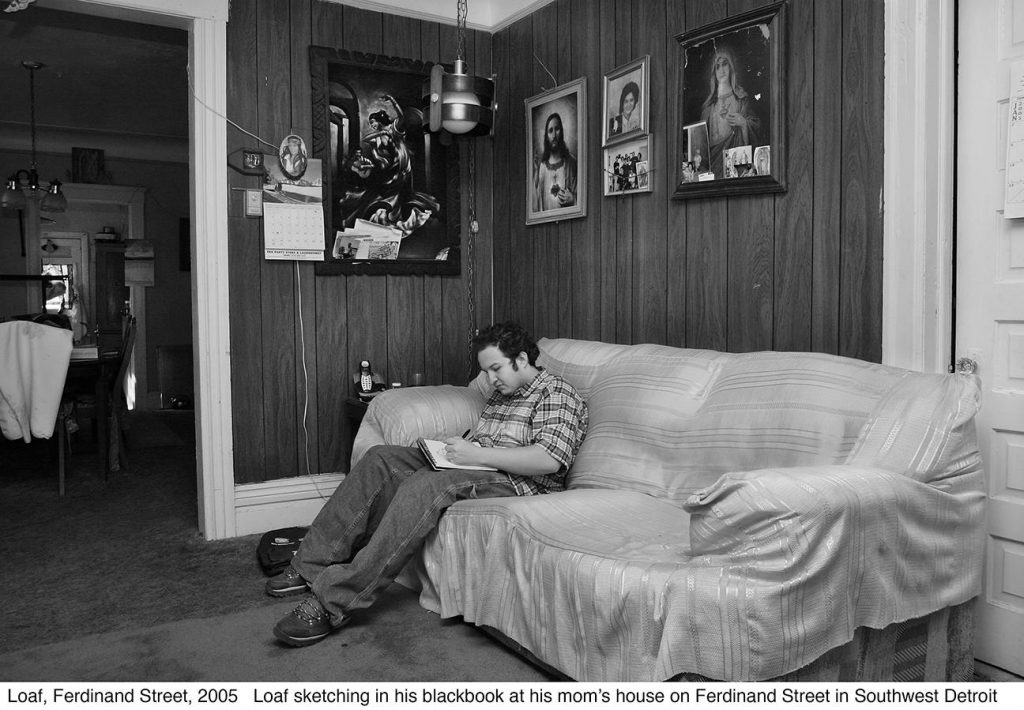 The second zine, Life is Dope: The Life and Times of Ryon Gonzalez, offers a comprehensive look at Ryon Gonzalez, a.k.a. TECK 9. Teck and Loaf lived a few houses down from each other on Ferdinand Street in Southwest Detroit This zine captures his coming of age while growing up in SW Detroit, culminating with his time spent in Flint, shortly before his untimely death in 2020. When we first met in 2004, Teck was 17 years old, so it’s kind of crazy to see him grow up as you’re flipping through the zine.

The third zine, Loaf: The Life and Times of Adam Willingham is a visual diary of our time spent together from 2004 until his death in 2017. Loaf was instrumental in making introductions for me throughout his circle of friends. Without him, I doubt this project would have ever gained traction. This zine, along with the TECK 9 zine, were designed as memorial pieces to acknowledge and celebrate their lives and to leave something behind, a physical document, that family and friends could keep after their passing. 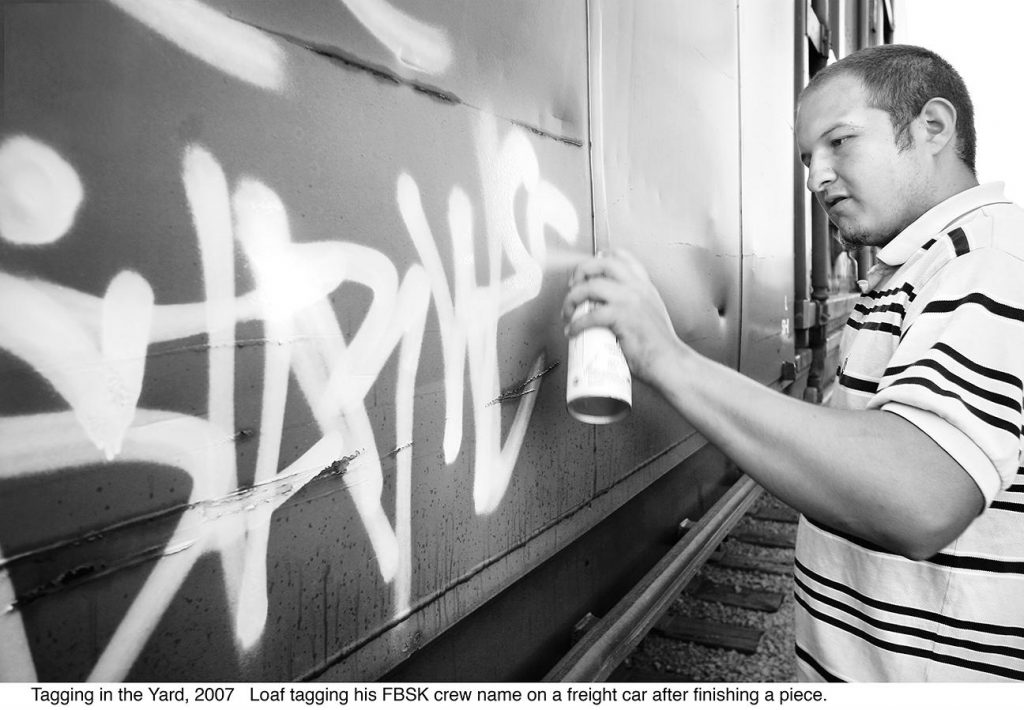 Can you talk about the artists, who they are and what made their art special?

It’s difficult to quantify what makes either of them special artistically. They both had immense talent, but what really cemented their status was their lifelong dedication to graffiti in its most faithful and natural state; illegal graffiti done under the cloak of darkness. Their reputations were built in that arena, so any judgements on their talent must also be considered along with their reputations on the street.

The zines seem related directly with your portfolio The Graffiti Writers of Southwest Detroit.  Why did you decide to print them as a zine edition?

Yes, the photographs came from The Graffiti Writers of Southwest Detroit portfolio. I always felt a disconnect between my fine art pursuits and the writers who occupied the photographs. I wanted to publish something that addressed that concern. Graffiti writers would sometimes show up at my exhibits, but more often than not, the exhibits didn’t really resonate for them. The zines were a conscious decision to bridge that gap; to do something purposely designed with them in mind. The images are stripped bare of any essays or information about the photographs, something that always frustrated me with institutional requirements, that often demand it as a prerequisite. The lack of adornment, was an effort on my part to let the photographs live on their own, without the weight of trying to intellectualize them. As corny as this might sound, the zines are a love letter to those that authentically represent the culture, and to the families and friends who are still mourning the loss of TECK 9 and LOAF. 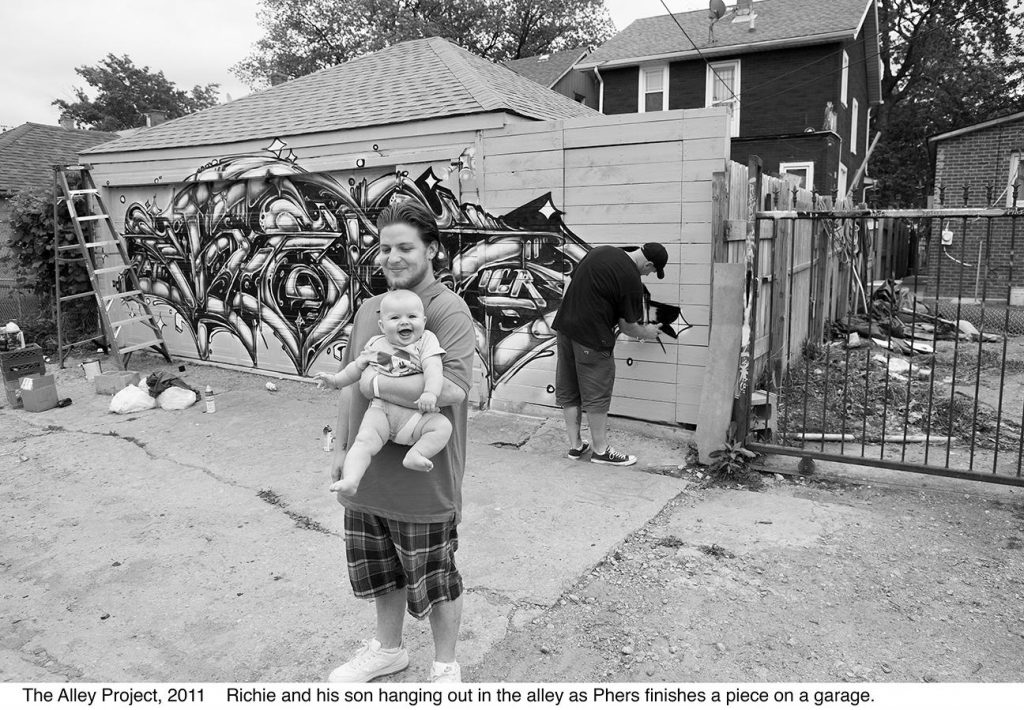 Is the graffiti project still ongoing?

It is ongoing. I can’t seem to stop! What’s been interesting, and this is evident when you look at the zines, is how the camera has shown them coming of age and transitioning into adulthood. This was a byproduct of me not knowing when to call it quits. It’s also a byproduct of the friendships I’ve made while working on this series. At some point, it organically transitioned away from them being “subjects” and eventually became about me documenting those around me, writers that I now consider to be close friends. I find it fascinating to see how the camera reveals the trajectory of someone’s life over the long game. Mary Ellen Mark did this to great effect with Erin “Tiny” Blackwell, a 13 year old prostitute that Mark faithfully documented up until her death in 2015. Milton Rogivin also did this to great effect with a working class neighborhood in Buffalo, NY.

Have any of these artist’s left the street to seek out galleries? Is that even a possibility for them?

There’s plenty of examples of graffiti writers leaving the streets to embrace the art world, but I haven’t seen it happen too much within the graffiti crew I’ve been photographing. A few have been making a living doing legal murals, but in my experience, the art world isn’t something they’ve fully embraced. Some have, but certainly not a majority. For the hardcore writers, the gallery scene doesn’t have the same impact as painting illegally. You can include me in that group too. There’s really no comparison. 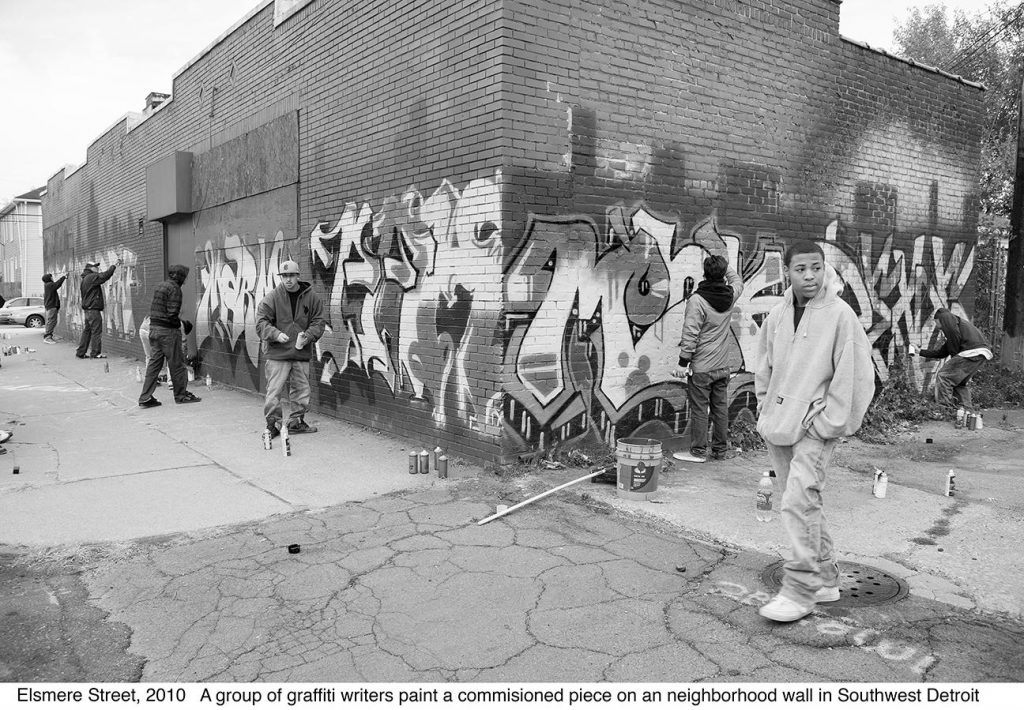 It seems logical that shooting graffiti walls in color would be the most natural and best way to document the art. What made you shoot them in black and white?

Early on I made the decision to shoot black & white. As I was ramping-up, I did my due diligence, and bought dozens of books and material related to graffiti, art. Almost everything I found was in color, with the exception of photographer Martha Cooper, who was hanging out with some writers in NYC during the early 80’s. She fluctuated between both color and B/W, but it was the black and white that I responded to. What struck me about her work was the intimacy and comradery between her subjects; it wasn’t just about the graffiti, it went beyond that, and I felt like I had the access and opportunity to do something equally important. It was a conscious effort to shift the focus away from the graffiti and make it about them, and more importantly, their lifestyle when they weren’t painting.

What do think graffiti means to the culture of SW Detroit? It has also influenced popular culture in important ways. How should outsiders or anyone new to graffiti approach it or be reading it?

My concerns don’t really focus on what or how others should approach graffiti. It’s not for everyone, nor should it be, especially if you grew up in a culture that sees it only from the perspective of civil disobedience. It’s complicated, but in Southwest Detroit it’s organically woven into the fabric of the neighborhoods. It’s not uncommon to see kids painting in alleys behind houses with family members and neighborhood kids looking on. If you’ve been raised in an environment where it’s commonplace, it doesn’t hold the same charge as it might for someone raised with more traditional approaches to creativity. 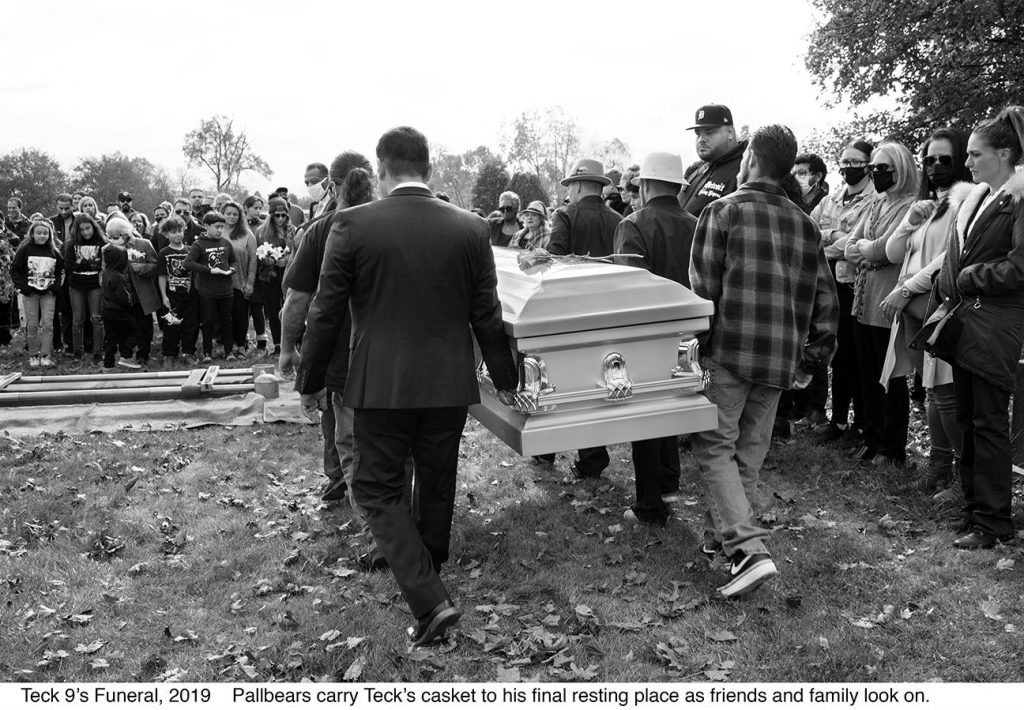 Most people see graffiti as simply defacement of property, an issue hard to get away from and what keeps it edgy and illegal. Could you describe your definition of graffiti: what is it and why it’s significant -what attracts you to it?

That’s a loaded question. Graffiti (done illegally) is not really that complicated. At its core, it’s the act of claiming public space by painting your name on a wall. It’s an act of protest in the wake of complacency. It’s saying, I’M HERE without paying for it. It’s perplexing to the general public, because people have been conditioned to accept something that is bought and paid for. Yet when you monetize graffiti in a sanctioned arena, it has more value to the public at large. Murals in the Market has had great success with this approach. Corporations know this too, and have placed great value in using graffiti as a tool to sell their products or re-brand their image. That’s not graffiti though, that is aerosol art. It’s a nuanced distinction but worthy of consideration. Graffiti for me personally, is representative of what I embody as an artist, which is my embracement and attraction to non-conformity.

All photographs above are ©Tom Stoye, 2021. Zines are available at the Book Beat bookstore, and are published in a signed edition of 300 copies each. They can also be found online at the Book Beat gallery, or by calling (248) 968-1190 or email: bookbeatorders@gmailcom.