A recent “scratchy” art monograph on underground cartoonist and archivist Savage Pencil (aka SAVX/ aka UK music journalist Edwin Pouncey) collects an eye-poppin’ selection from a legendary multi-decade career. As one of the most visible, ratty and raw founders of the graphX arm of the Punk, Metal and Noise-rock scenes, SavX poured his sweat and soul into a singular, hallucinatory, and crusty visual language — infused with his own dark acidic-demented genius.

Young SavX soon discovered the radical music of Frank Zappa and the Mothers of Invention, Captain Beefheart, and the pleasures of collecting antiquarian books by occult historian Montague Summers. SavX and his friends dubbed their book collecting obsession “the new rock ‘n roll.” 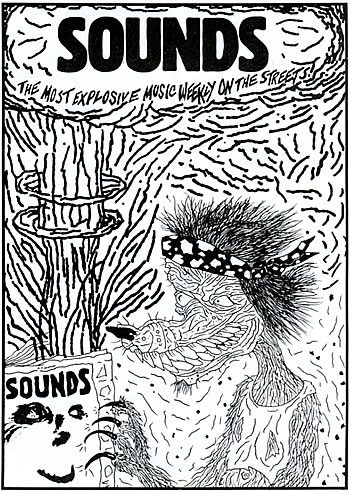 Rated SavX is jam packed with rarities — much of it inaccessible online, or produced in limited editions near impossible to find. Early zines such as Oryx Komic, Corpsemeat, Dead Duck, Disposable Bag, and The Reichstag Bleep Hour poetry collection, are given space alongside comic-strips of the 1970s punk-fueled ‘Rock ‘N’ Roll Zoo’ found inside Sounds Magazine (‘The Most Explosive Music Weekly on the Streets’), to the fright-fest series of NME’s ‘Karrgarock, Eater of Souls’, to his beloved music/comic satire editorials of ‘Trip or Squeek’ for The Wire Magazine — a touchstone of exquisite pop-culture weirdness comparable to Basil Wolverton’s Culture Corner. The SavX strips with their subversive jokes and explosive psychotic drawings were a major asset for the UK music rags. There’s never been anything close to replace them in badass knowledge or skill.

Savage Pencil’s imagery has come to occupy a unique space within punk graphics.  Strewn with horror and layered over with a wild yet deadpan comedic wit –“a style both frightening and instantly recognizable.” His strange made-up wordplay and running commentary inside the comics puts another odd spin on the work. The extraordinary ability of SavX to remain comic, shocking and under-board, lifts the work into a timeless land between outlaw biker fright the avant-guard.

His sporadic line drawings are wicked, intricately detailed, and performative; elaborate scratchy doodles that have lost all direction, but kept the cesspool neurotic edginess of a George Grosz or Otto Dix: visions from the outback. His artwork stands beside contemporaries Raymond Pettibon and Gary Panter as some of the most iconic and original on the subject of music in the post-sixties era.

In spite of his academic training, Savage Pencil has retained one of the most brutal and raw line styles in contemporary art. On his own technique, SavX commented, “It’s automatic drawing really, using this trippy, improvisational technique that I’m slowly perfecting.” 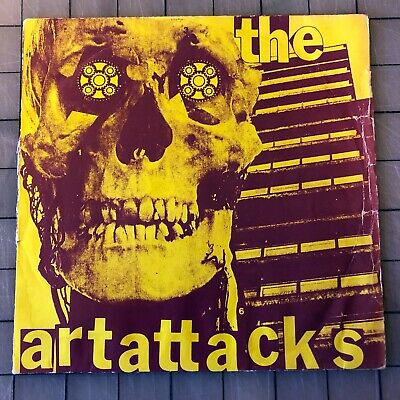 The Art Attacks – I Am A Dalek (7″, Single) cover design by Savage Pencil.

Much musical themed and oddball ephemera is included in Rated X, including T-shirt designs, posters and other merchandise for bands; Sonic Youth, Big Black, The Fall, Sunn O))), Coil, and Earth, and a host of other obscure punk rockers, metal gurus, and noise addicts.

About 90 Savage Pencil designs can be seen gracing albums on discogs, including the design for his own band The Art Attacks (1978).

It’s wonderful timing to see this darkly beautiful “scratch-book” released during the angsty pandemic overload — a time when it can’t be properly promoted and probably difficult to find. But search one out: essential reading for the apocalypse, with artwork matching these horrid times. Devotees of the weird here is your guidebook. Opening the book and discovering Savage Pencil through this outrageous collection is like dissecting the mind of a monster. 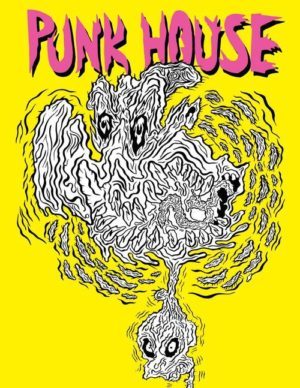 Note full disclosure: As Edwin Pouncey, he’s one of the few journalists to review my past musical projects. In 2017, I curated Punk House, an exhibition of Detroit musician art and artifacts held Sept. 8, 2017 through January 7, 2018, at Mike Kelley’s Mobile Homestead in Detroit. The exhibit was centered around artist Savage Pencil’s spontaneous mural designs and installations executed a week before the opening. SavX also designed the front and back covers for Punk House: an artist compilation zine, music video DVD, and LP.