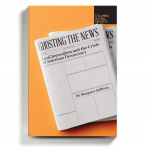 While the death of newspapers is no longer news, the social impact of their loss has not been replaced by online news sources (bogus or reliable) or even by local TV and radio stations. Few papers anymore can afford multiple investigations taking weeks or months of research and vetting by fact-checkers, and few papers can now afford lawyers to handle the potential lawsuits brought by unhappy subjects of investigative journalism. While a few newspapers have been able sustain themselves—such as The New York Times, Washington Post, and Los Angeles Times—the achievement has come by positioning themselves as national or even international newspapers, not local papers reporting local millage issues.

A couple of months ago in my review of a century-old collection of muckraking journalism, The Shame of the Cities by Lincoln Steffens, I noted that “[w]ith the death of [local] newspapers . . . has come a lower level of responsibility and accountability among those on city and county payrolls, since fewer third-parties with the financial resources are available to independently verify how the cities and counties are actually run and what tax monies actually pay for. That third party was often the local newspaper, which tracked financial and other legal records, interviewed witnesses, and otherwise connected the dots. Small town papers, where they exist now, rarely stray from self-congratulatory boosterism.”

Ghosting the News is an account by veteran reporter and editor Margaret Sullivan on what is happening at the civic level as a result of more and larger “news deserts”—places without access to local, legitimate news: “[D]ay-in-and-day-out local reporting . . . makes secretive town officials unhappy because of what they can’t get away with, and lets local taxpayers know how their money is being spent.” A study conducted in 2019 by PEN America (an organization devoted to literature and human rights) found that “As local journalism declines, government officials conduct themselves with less integrity, efficiency, and effectiveness, and corporate malfeasance goes unchecked. With the loss of local news, citizens are less likely to vote, less politically informed, and less likely to run for office.”

Furthermore, Sullivan reports, “Studies in Japan and Switzerland have found much the same dynamic: In places where news breaks down, so does citizenship; where newspaper market share increases, so does political accountability.” In short, a lack of reliable news sources results in “less civic engagement, more political polarization, more potential for government corruption.”

So, what is to be done? Sullivan offers examples of what is currently working, and what might be necessary to ensure that issues of local importance are reported and made widely available. The first example, and hardest to find, requires being bought by a benevolent billionaire, as happened to the LA Times and Washington Post, whose owners have, to date, kept their hands off editorial decisions. The other, more tenuous example is the non-profit route, in which papers change from a for-profit format (because the advertiser revenues are no longer there) supported by subscribers and deep-pocket donors. The third possibility, which among American journalists is looked upon with deep skepticism, is government subsidy.

Interview on CNN with Margaret Sullivan, media critic for the Washington Post and author of Ghosting the News.

In Brazil, India, and other countries, manufacturing industries rely on charcoal for heat and power. The charcoal used is ideally made from eucalyptus wood heated inside a hut-shaped, stone or clay structure. Once entirely packed with wood, the opening itself is filled with stone or clay. The heat removes the water from the wood which, when transformed into charcoal, provides intense heat and little smoke. Brazil’s forests are in part being transformed into charcoal via eucalyptus plantations, and the people who make the charcoal are often children.

But wait. It gets worse: The child labor is also often forced labor.

Roger Mello is an illustrator and writer from Brazil, who has focused on contributing to children’s literature, and has won the Hans Christian Anderson Award: the highest international award in children’s lit. Charcoal Boys tells the story of one boy who makes charcoal, as told by a wasp—a mother wasp who has difficulty feeding her egg with a caterpillar because of the ecological disruption caused by charcoal plantations. Mello’s illustrations perfectly match the content (the center, die-cut fire is a great touch), and they demonstrate the triumph of imagination over budget: From the simplest of materials, Mello creates a profound and disturbing story for children about other children whose lives are not as one would hope.

The Last Train: A Holocaust Story
By Rona Arato
Owlkids

One Hungarian family’s true story of surviving through Nazi roundups, cattle-car deportations, forced labor, disease, and worse during the last year of WWII in Europe. Based on accounts from her husband, Paul, whose family’s story this is, Arato creates a sense of horror seen and felt by Paul when he was aged 10 to 11 (about the age as the book’s intended readership). The horrors described here, it should be noted, are not outlined in gruesome detail. We know some people die of typhus, for instance, but not what they looked like or suffered; same with the Nazis. While it’s clear that these are seriously bad people, hope is a thread that runs throughout the story; love of family, another.

The book’s (tested) optimism shines out not just because of the love within the Auslander family that helped them survive and stay together, but also because of the gratitude shown their rescuers, a bunch of young American soldiers. And 65 years later, Paul was able again to meet and thank the GIs who had rescued his family.

my little one
by Germano Zullo and Albertine (Katie Kitamura, trans.)
Elsewhere Editions

Winner of the 2016 Bologna Ragazzi Award

A sweet, gentle book for ages 5-9 about how love endures over time and generations. Simple line drawings match the simple line of prose below each one: “I love you. / And you know what? / I have so many things to tell you.” In my little one, a mother raises her son, who grows over time while she shrinks—but only in size, not importance.

Bio on Zullo and Albertine on Picturebook Makers.

This issue of Aperture magazine is devoted to the influence of Nan Goldin’s The Ballad of Sexual Dependency since its publication in 1986. (Although it was released as a photobook in the mid-80s, an amorphous version of The Ballad existed before then as a slide show with music, presented in various venues across New York City. In that version, Goldin kept adding and deleting photographs and changing their order, same with the music: every show was different.The music served as an emotional arc for the “story” that unspooled.)

Goldin used color photography (at the time just beginning to be accepted as “serious” art) to intimately document the gritty lives of herself and her friends, her and other’s relationships, hanging out, partying, and being abused by lovers—the latter as a topic for photography a significant influence for women in encourage the range of topics art could cover and how it could talk about them. The colors and moments are framed, composed, and selected for their immediate and emotional pull.

Daryl Pinkney’s interview of Goldin is followed by selection of photographs and books by other artists who influenced Goldin’s eye, as well as samples from over a dozen photographers from around the world who claim Goldin’s work as inspiration for their own, including Jack Pierson, Mark Morrisroe, Libuse Jarcovjakova, David Wojnarowicz, Pablo Bartholomew, Sunny Suits, Daragh Soden, Liz Johnson Artur, Abdule Kircher, Clifford Prince King, and others.

One of my favorite magazines, front to back. Featuring an excellent design, covers, and opening feature by Seth; essays on book collecting, forgotten and recently reprinted gems; book reviews and original fiction, poetry, and nonfiction representing a broad variety of Canadian experiences—from First Peoples to recent immigrants, Anglos and Francophones (although the magazine is in English); written and illustrated with humor, sympathy, vivid curiosity, and insight, three times a year, Canadian Notes & Queries brings to my home the creaks of an old used bookstore’s worn wooden floors The tone is closer to intimacy than in the pages of, say, The Atlantic, Harper’s, or the New York Review of Books—which may also cover similar topics—but more like a conversation on a couch than from a dais.

Readers on the prowl for contemporary, indie-press contemporary American poetry should check out Brooklyn’s Ugly Duck Presse [sic] and its Second Factory for a decent intro/overview. (Second Factory seems to be Ugly Duckling Presse’s replacement poetry journal for their previous poetry pamphlet series, 6×6, which ran for—you got it—36 issues.)

Rama Beyond Price is a dramatic redaction of the Ramáyana, of which written versions first appeared over a thousand years ago. The epic story (five volumes in the Clay Sanskrit Library edition) concerns the royalty-deity protagonists Rama, his brother Lakshmana, and Rama’s wife Sita, who are all exiled to a forest for 14 years by a trick of Rama’s evil stepmother, shortly after Rama and Sita are wed. The trio encounter more trouble during the banishment when another royalty-deity, Ravana, kidnaps Sita as revenge for Rama and Lakshmana having cut off his sister’s nose. Rama and his allies—including an army of monkeys—wage a mountain-leveling war to defeat Ravana and return Sita. Upon her return, the day isn’t over yet for Sita, who must now prove—by fire—her faithfulness to Rama during her captivity with Ravana. Emerging from the fire unscathed, her chastity demonstrated, Sita and Rama can now enjoy their overdue wedded bliss.

As a drama, Rama Beyond Price has less non-stop action than one might imagine of a story sated with beheadings, dismemberments, monkey armies, flying arrows, fire, drained lakes and tossed mountains. Besides being beyond the CGI abilities of a thousand years ago, mortal combat was something that occurred off stage in the theater of this place and time, and is only described as it is happening by characters on stage, who are looking in the distance as they talk. Thus, Rama Beyond Price is more an abridged reading of the Ramáyana than a reenactment of it. The notion of theater at work here differs strongly from that held today in the West. When Rama Beyond Price was originally performed, it was presumably performed as “chanting recitations of poetry interspersed with well-choreographed movements” [1].

Transliterated Sanskrit appears on pages facing the translation, and guides to pronouncing Sanskrit as well as extensive footnotes (in both English and Sanskrit) are also provided.

And Now, Sir—Is This Your Missing Gonad?
by Jim Woodring
Fantagraphics

An album of single-page images, usually matched to a non sequitur, featuring Woodring’s usual cast of characters (in every sense of the word): Frank, Pupshaw and Pushpaw, Manhog, and others. This is the kind of thing you’ll like, if you like this kind of thing. I do, and Woodring’s draftsmanship is as deft as ever, combining the bizarre with the vaguely familiar. Not as compelling a volume as when Woodring adds a narrative, but the illustrations are fine work.

Watch “The Illumination of Jim Woodring,” a New Documentary on the Fascinating Artist: