A collection of books by six Detroit photographers new to Book Beat in 2021. Each are strong unique bookworks by area photographers we’re proud to feature. Books are available in store as well as online in the Book Beat Gallery. We’d appreciate your sharing this catalog post with friends no longer living in the city, who might be interested, thank you!

A NEW expanded facsimile of the 1979 edition with 140 classic photos by Barbara Weinberg Barefield, with expanded texts by Herb Boyd and Larry Gabriel. Signed copies by Barbara Barefield are available!

Decades of Detroit’s rich legacy of Black music, Jazz and dance from the 20th century is captured within 80 pages brimming with iconic photographs by Barbara Weinberg Barefield and narrative by noted author/historian Herb Boyd — plus a new prologue and epilogue by Detroit writer Larry Gabriel.

Jazz Space Detroit preserves and elevates this legacy by illuminating a vibrant slice of American culture through more than 140 intimate photographs, portraits, and first-hand insights. 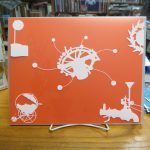 Photography by Carlos Diaz, forward by A. D. Coleman, signed copies by the photographer are available.

Carlos Diaz’s early 1980s carnival worker images and his Invented Landscapes are brought together for the first time in a beautifully presented volume published in 2017 by Obscura Land. Signed copies are available, printed in an edition of 825 copies.

Diaz’s Invented Landscapes work spans three decades, starting with images he captured in the early 1980s at Coney Island in New York City. The original collages combine silver halide prints with vintage nineteenth-century industrial engravings that he painstakingly cut by hand from books and other printed materials. He then carefully integrated the drawings with the photos to create these fantastical images.

Black and White portraits of the Detroit artist community, 2013 – 2018. At home or in the studio, the artists speak to the viewer; they tell us who they are. Softcover book with heavy matte card stock cover. Each image on its own page. Edition of 50 copies, signed by the photographer. Donita Simpson spends her time photographing established and emerging artists in Metro Detroit. She explores the artists, their studios and the newly created environment that exists between the artist and the photographer.

Color portraits of the Detroit artist community, 2013 – 2018. At home or in the studio, the artists speak to the viewer; they tell us who they are. Softcover book with heavy matte card stock cover. Each image on its own page. Edition of 50 copies, signed by the photographer. Donita Simpson spends her time photographing established and emerging artists in Metro Detroit. She explores the artists, their studios and the newly created environment that exists between the artist and the photographer.

Signed and numbered edition of 300 copies.

This is a single package of all three Tom Stoye zines published in 2021. Included are: The Alley Project, Life is Dope: The Life and Times of Ryon Gonzalez, and Loaf: The Life and Times of Adam Willingham. Each zine is available individually as well. Tom Stoye (b.1959) is an established social documentary photographer from Detroit, Michigan.His primary interest, in photography, is using the camera as a narrative tool
to capture in-depth, socially relevant stories derived from his personal experiences while engaging the city of Detroit and its people.

Save 10% online discount when buying all three zines together. 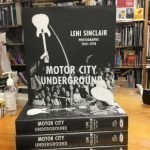 Motor City Underground is a comprehensive document of the art, rock and roll, and political scenes of 1960s Detroit. The images are arranged in a loose chronology, including events and subjects such as the March on Washington of 1963, and various performances and artists’ events in and around Wayne State University in Detroit; continuing on to the Detroit Artists Workshop, John Sinclair’s activities with jazz musicians and poets, events in Berkeley, Detroit and Ann Arbor; early concerts with the MC5 and Iggy and the Stooges in the Grande Ballroom; anti-war protests, Detroit Uprising and the Black Panthers; spectacular documentation of the influential performance style of the MC5; John Sinclair’s various arrests for marijuana possession and the police response to social protest; the Trans-Love Commune in Detroit and Ann Arbor; large-scale outdoor concerts in Detroit and elsewhere; Leni Sinclair’s ongoing documentation of Sun Ra, and other luminaries in jazz, blues and rock and roll.

A self-taught photographer, Leni Sinclair emigrated to the US from East Germany in 1959; in 1964 she met poet, jazz critic and manager of the MC5, John Sinclair. The two married the same year and embarked on a decade of political activism, first founding the Artist’s Workshop, a network of communal houses and performance spaces which evolved into the Trans-Love Energies Commune. The following year the Sinclairs founded the White Panther party in solidarity with the Black Panthers. The couple divorced in 1977; Leni has continued to practice photography and lives in Detroit. 408 pps, published by MOCAD, signed copies available.

A signed and numbered limited edition of 50 copies with a handmade silver print signed by Leni Sinclair. The book and photograph are enclosed in a cloth silkscreened slipcase designed by Gary Grimshaw from a design taken from the Straight Theater MC5 San Francisco poster. NOTE: Edition comes with either the Iggy Pop portrait or the cover image of Fred Smith and the MC5 live.