“The struggles of the 1960s can be glimpsed, dramatically, in Leni Sinclair’s MOTOR CITY UNDERGROUND: Photographs 1963-1978 (Museum of Contemporary Art Detroit/Foggy Notion Books, 407 pp., $60), edited by Cary Loren and Lorraine Wild and with a contribution by Kristine McKenna. For many years Leni Sinclair was married to John Sinclair, a poet and jazz critic who by the end of the decade had become head of the White Panther Party, a Detroit-based attempt to forge a white working-class analogue to the Black Panthers. In the earlier ’60s, Sinclair and his friends wear suits, organize jazz events featuring various immortals — John Coltrane, Cecil Taylor, Albert Ayler — and march for civil rights and an end to the war in Vietnam. By 1967, Sinclair looks like the prophet of the swamps, oversees a raucous scene featuring the MC5 and the Stooges, who are attempting to channel the energies of free jazz into populist rock ’n’ roll, and promotes a platform calling for music, drugs and rutting in the streets (actual wording slightly different).

Leni Sinclair’s photos capture the carnivalesque excitement, disquiet and jejune playacting of this scene — asked later about the guns being waved around in various photos, she said: “We were hippies! … We were just showing off.” She is a sensitive and versatile photographer, equally at ease depicting riots, communal decision-making, urban decay, cultural shifts and the vivid faces of the elders of Black music.” –Lucy Sante, “Immersive and Dramatic New Photography Books,” New York Times

“The Sinclairs and the Detroit Arts Workshop might have kept operating within this vital, but rather small and insular, jazz scene (with some folk, blues, poetry, and other arts as well) had not some unexpected events thrown them into the center of the city’s exploding rock inferno. As Leni explains, in February 1966, “John went to jail [for marijuana possession] for six months. When he got out of jail, [in] that time the world had changed, it seemed. Instead of a whole big jazz scene, what was happening was a whole big youth movement.”

And, a little surprisingly, it was one of those very jazz musicians he’d worked with who helped steer John toward rock. “There was a jazz musician who told John Sinclair to listen to the Beatles. In fact, it was Joseph Jarman of the Art Ensemble of Chicago, who told John, ‘You should start listening to this shit. Listen to Revolver.’ Then John started opening his ears more away from jazz. Then he met the MC5.”–Leni Sinclair interview and review of Motor City Underground review in Please Kill Me

More than a decade in the making, Motor City Underground: The Photography of Leni Sinclair 1963-1978 is the first major monograph to span the career of this legendary Detroit area photographer.

Leni Sinclair’s life history is woven into the happenings, politics, and music of Detroit culture from the 1960s, 70s, and beyond. The book opens with documentation of the  March on Washington in 1963,  and moves to the avant-garde Red Door Gallery, the formation of the Detroit Artist’s Workshop, and the pioneers of free jazz and the growth of home-grown blues and rock ‘n roll.

Motor City Underground contains a major section documenting the MC5, with many never-before-seen and unpublished photographs. Included are period shots of Iggy Pop, Jimi Hendrix, the SRC, Mitch Ryder, Bob Seger, Ted Lucas, Dr. John, Commander Cody and the Lost Planet Airmen, The Up, and many other Detroit and international luminaries of art, music and politics.

Leni Sinclair was a cultural activist present at the foundation of the Artist Workshop, Trans-Love Energies, the White Panther Party, the Red Star Sisters, the Free John Sinclair movement, and the Rainbow Peoples Party. She also documented the Ann Arbor Blues and Jazz Festivals, the Sun Ra Arkestra,  and helped manage the release of the Detroit Red Squad files under the direction of Mayor Coleman Young. Her relentless creative energy places Leni in the vanguard of all Detroit artists. In 2017, she won the Eminent Artist Award from the Kresge Foundation.

An in-depth interview of Leni Sinclair by Kristine McKenna caps off the book. Motor City Underground is beautifully designed and photo edited by Lorraine Wild and Green Dragon Press in Los Angeles. The book project was instigated by artist Mike Kelley in 2010, who was inspired by the Detroit rock aesthetics and radical politics in his youth (as were Loren and Wild).

Motor City Underground is an oversized hardbound book, 10″x11″, 408 pages, with hundreds of photos, flyers, posters and other ephemera. The book is published by MOCAD / Foggy Notion in a small edition of 500 copies. 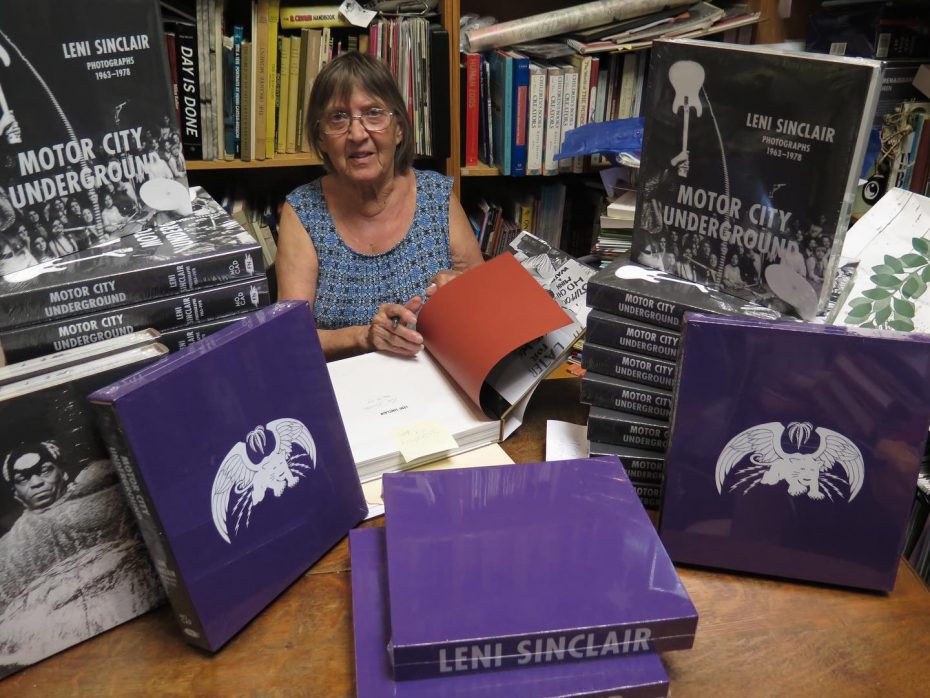 First edition signed hardcover copies are available while supplies last! Shrink-wrapped copies will be shipped when signed books are unavailable.

A signed, numbered, limited edition of 50 copies is also available. The book is housed in a purple cloth handmade slipcase with a Gary Grimshaw estate sanctioned silkscreen of a winged white panther on the cloth cover.  (MC5 San Francisco Straight Theater design). The book is signed and numbered and includes a silver gelatin photograph, hand printed on archival fiber based paper, and signed in pencil on the reverse by Leni Sinclair.  Click on LENI LIMITED EDITION for availability or call (248) 968-1190 for more info.