Blossoms will run away,
Cakes reign but a Day,
But Memory like Melody
Is pink Eternally. -Emily Dickinson

In 1992-1993, I took a year off from my job as a high school English and Creative Writing teacher in Detroit Public Schools and went on sabbatical as a “Teacher/Scholar” thanks to funding from the National Endowment for the Humanities. My purpose was to study the life and work of Emily Dickinson.

As “Teacher-Scholars,” K-12 teachers in the program were required to find an academic mentor to guide their work, and I was lucky to enlist the services of Dr. Jane Eberwein, Professor of English at Oakland University. Dr. Eberwein has written numerous books and articles on Dickinson and was one of the founders of the Emily Dickinson International Society, which has grown from a handful of scholars in 1988 to a large international organization with a journal, newsletter, hundreds of chapters, and an annual conference held in the US or abroad.

As she was editing An Emily Dickinson Encyclopedia (Greenwood Press, 1993) at the time, Jane kindly invited me to write entries on three topics: “Science as Subject”; “Isolation as Subject”; and Dickinson’s poem (F95) beginning “Flowers—Well—if anybody/Can the ecstasy explain—” which was one of the handful of poems published during her lifetime.

Back from sabbatical, I brought Dickinson into classrooms and workshops with students and published an essay about this work, “Mixing It Up With Dickinson,” which appeared in 2001 in The Teachers & Writers Guide to Classic American Literature. My poems “Emily’s Bee” and “Amherst: Her Grave in Autumn” first appeared in Poet Lore. “Teaching with Emily One Morning in Spring” was published by English Journal, and all three were included in my second poetry collection, Escape Artist, which won the John Ciardi Prize from BkMk Press in 2003.

Fast forward to InsideOut in 2010-2011 when we sponsored a federally funded citywide “Big Read” that brought dozens of Dickinson-themed activities to Detroit classrooms and community venues. The year featured a community reading and a student performance at the DIA, a multi-media workshop with students at the Carr Center, a lecture that Ed Hirsch and I gave at the Detroit Public Library, a Dickinson birthday party at CCS, teacher workshops and many student activities. John Wood’s students at Detroit School of Arts created a film based on Dickinson’s Poem 1788, “Fame is a Bee”, and we presented that film during a panel presentation on bringing Dickinson to students at the National Council of Teachers of English Annual Conference in Chicago.

A special highlight from that year was Blair’s Dickinson-inspired performance in the Rivera Court in January 2011 just a few months before he died. His setting of “Tie the Strings to my Life, My Lord” (P 279) was part of a song cycle I had commissioned for the project. Blair had not read her previously and, as happens with most of us, she -—to paraphrase Dickinson’s own words about how poetry affected her—“took the top of his head off.” We didn’t get to record all of the songs, but fortunately we have this treasure featured on the blog Brain Pickings: Blair Sets Emily Dickinson’s “Farewell” to Song Shortly Before His Death

In 2015 I retired after 20 years as iO’s founding director and moved to Connecticut a year later to be with my son and family. Being in Connecticut allows me easy access to the Dickinson Homestead in Amherst, Massachusetts, which houses her museum where I’ve driven frequently for poetry programs. The turn-off toward Amherst onto Highway 9 from US 91 always fills me with a sense of peace. The Pioneer Valley is ringed with mountains, and I realize that she would have looked on those same mountains. 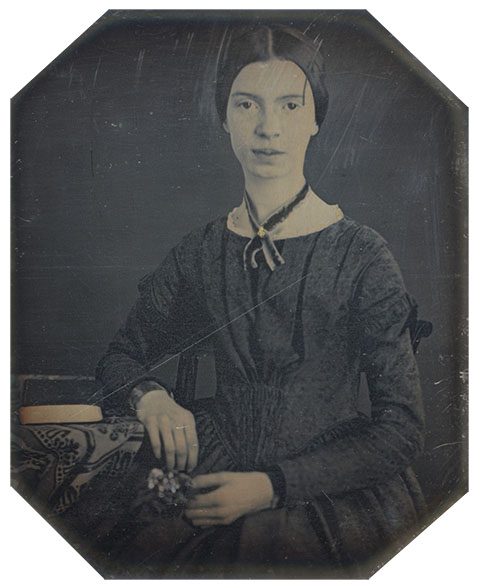 If I stay overnight, I get a room at the Amherst Inn, which was built during her lifetime directly across the street from her home, and gives a view to the corner room, with windows facing south and west —Her Room, the nucleus of the atom, where she found the freedom and solitude for her tremendous creative output.

As a fundraiser, the museum makes her room available for one hour at a time to scholars and poets, so I happily took advantage of the offer a couple of years ago. The resulting poem “In Her Chamber” and another Dickinson inspired poem “Noon in a Corner Café: the Sign” appeared on line at Interim: Poetry and Poetics [bottom of page]. Each is included in my most recent book: One Less River. –Terry Blackhawk, May, 2020 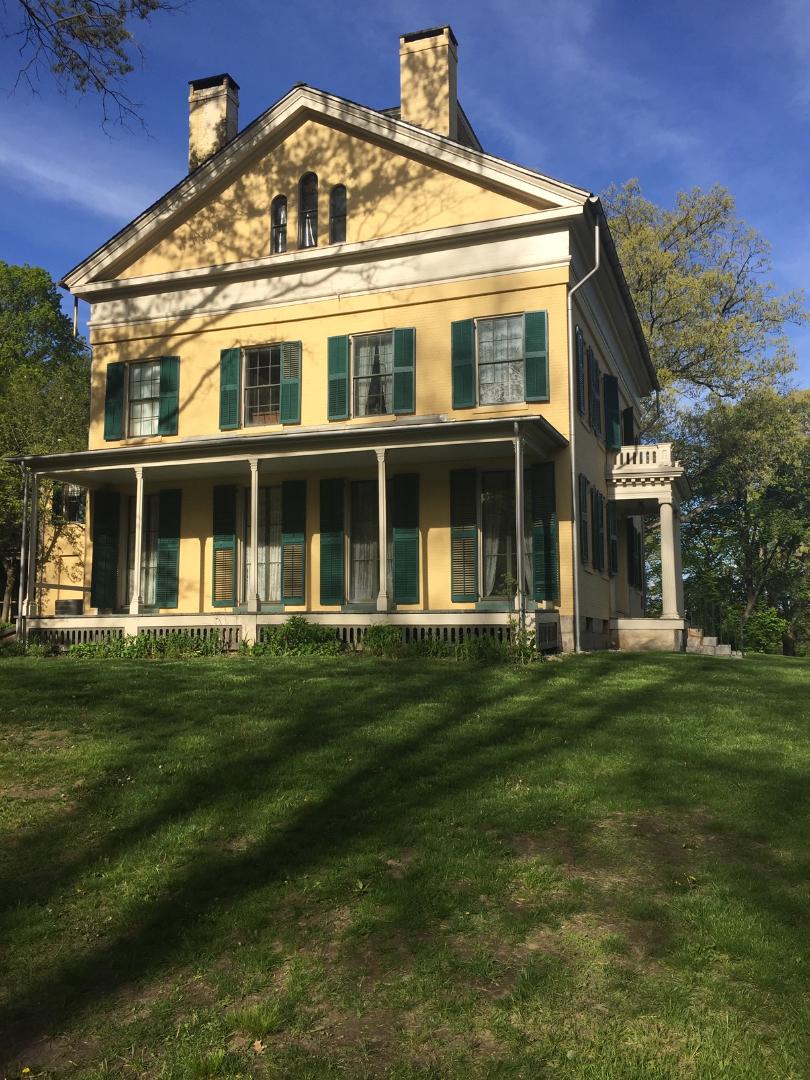 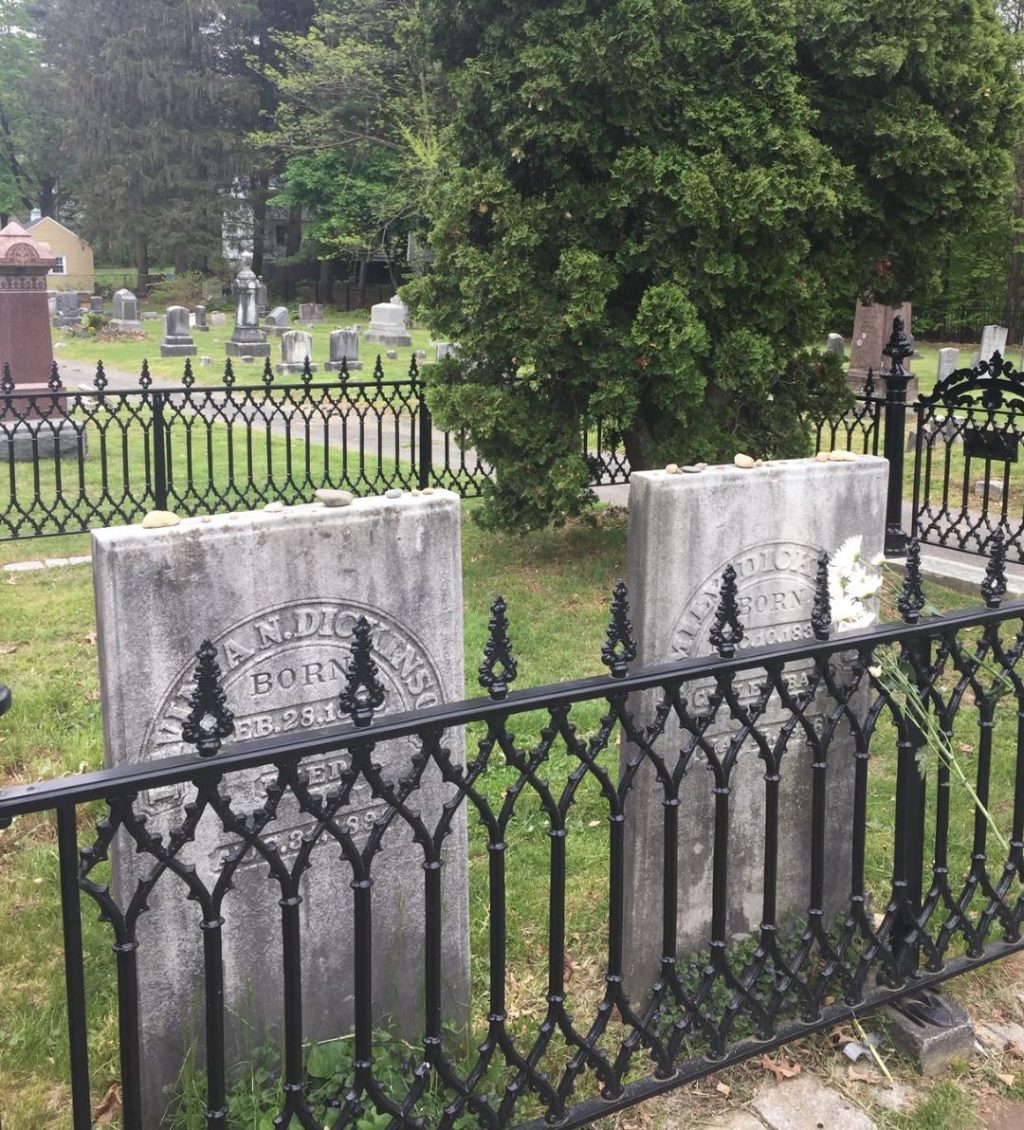 Grave marker for Emily Dickinson and her sister Lavinia beside her. Photo by Terry Blackhawk

Terry’s poem She Awakens in a Town by the Sea featured recently on Verse Daily. 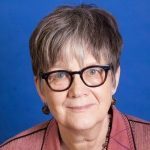 Terry Blackhawk, Founder and Executive Director Emerita of InsideOut Literary Arts Project (iO), is the author of Escape Artist, winner of the John Ciardi Prize, The Light Between, and six other books of poetry. She is co-editor with Peter Markus of To Light a Fire: Twenty Years with the InsideOut Literary Arts Project, a collection of essays by iO poets-in-residence. She was twice named Michigan Creative Writing Teacher of the Year and received the Michigan Governors’ Award for Arts Education. Blackhawk received the Pablo Neruda Poetry Prize from Nimrod International and is a Kresge Arts in Detroit Literary Fellow. Her poems have appeared in numerous journals and anthologies and on line at Poetry Daily, Verse Daily and elsewhere. Her most recent poetry collection is; One Last River, (Mayapple Press 2019). Read an interview with Terry at First Person Plural.

Overheard among the Arthropods, based on the poem with the same title by Terry Blackhawk, navigates the passage of time, changing physical features, and mysteries of identity (both hidden and exposed). Claymation, puppetry, live-action footage and watery sounds invite viewers to listen in on this conversation between hermit crabs on themes of shells and shifting.

Poetry
One comment on “Terry Blackhawk on Emily Dickinson”