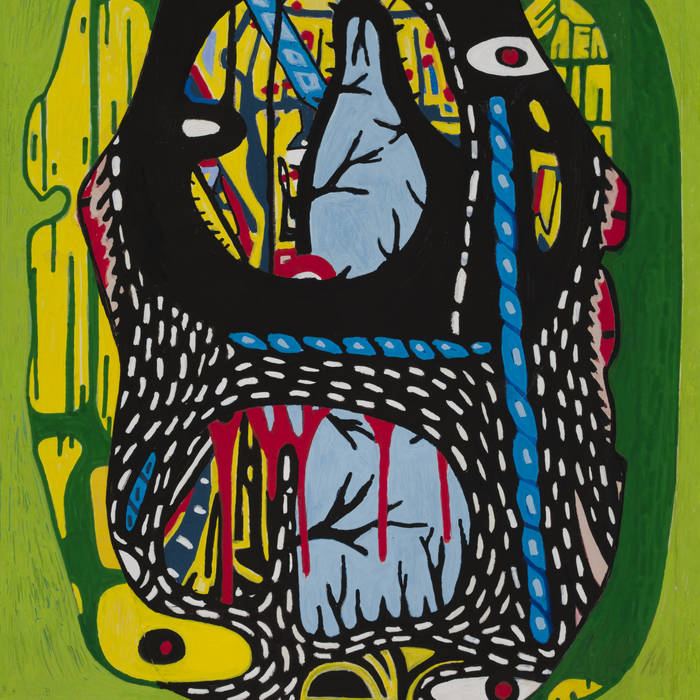 Cover art for In the Moment: Second Dose [detail] by Jim Chatelain, 2020

Musician, composer, and multi-instrumentalist Benjamin Miller has been a member of many avant-rock ensembles including Sproton Layer (1969-1971); Empool (1976-1978); Destroy All Monsters (1977-1978); M3—with brothers Roger and Laurence Miller (1989-2001). Miller currently performs with the groups Porcelin Hammer (Detroit) and the Sensorium Saxophone Orchestra (NYC) and has been performing solo multiphonic guitar for many years.

Miller is a bricoleur of sound, a “tone-scientist” (as Sun Ra would say) conversing with an oddly prepared (in the tradition of John Cage) instrument. In the Moment covers seven choice selections recorded between 1984-2014, and demonstrates a rich vein of solo ideas and styles; an unhinged sonic palate merging into musical delirium. In the Moment doesn’t exhaust all its ideas quickly; rather it slowly delivers a hallucinogenic and often humorous enchantment, one that spirals deeper with multiple listening. Miller’s multi-decade project is testament to a fluorescent, active, and trippy local underground.

In the Moment is available on Bandcamp or from Book Beat.

The following interview with Ben Miller was done by email May 1-2, 2022.

I’m curious about your tabletop guitar setup. What were some of your inspirations for that, and can you discuss how it developed?

I’ve always been interested in the Art-side of Music. For example, the quirky nuances of psychedelia; tape loops on Tomorrow Never Knows or the paper-ripping sound at the beginning of Lucifer Sam. Found Sound transforms songwriting into something other than standard hearing. They help create a 3-dimensional listening experience. Anything other than the usual instrumentation of a rock band.

I developed The Zoo while in the band GKW (God Knows Who) during the early 80’s. I recalled Fred Frith’s No Birds LP and wanted to get that same stereo field with pickups positioned on either side of the fretted pitch. So, I took the neck pickup of my guitar and attached it to the Peg head by way of a steel rod and some tinker toys such that the pickup now hovered over the first fret of the guitar facing down above the strings. (I later found out that Fred’s guitar nut was a built-in pickup) My guitar, a Gibson Kalamazoo, was gutted having no pickguard, no volume controls and no tone controls. It simply had two outputs routed to an Ernie Ball stereo volume pedal [the Bridge pickup in standard placement and the First Fret pickup, inverted over the strings]. Later, I added a piezo pickup at the headstock and a piezo pickup on the body – also panned hard Left/Right in the stereo field.

GKW used a large industrial table for all our equipment; analog synths, tape recorders, a multitude of FX devices and guitars. Once, I attached The Zoo to a camera tripod. During the 90’s, while living in Chicago, performing with Dirty Old Man River, I used and continue to use a keyboard stand with the guitar laid flat on its back. Another keyboard stand with a plank of wood holds most of my effects pedals, a Casio SK1 keyboard, a transistor radio, and tape machines. 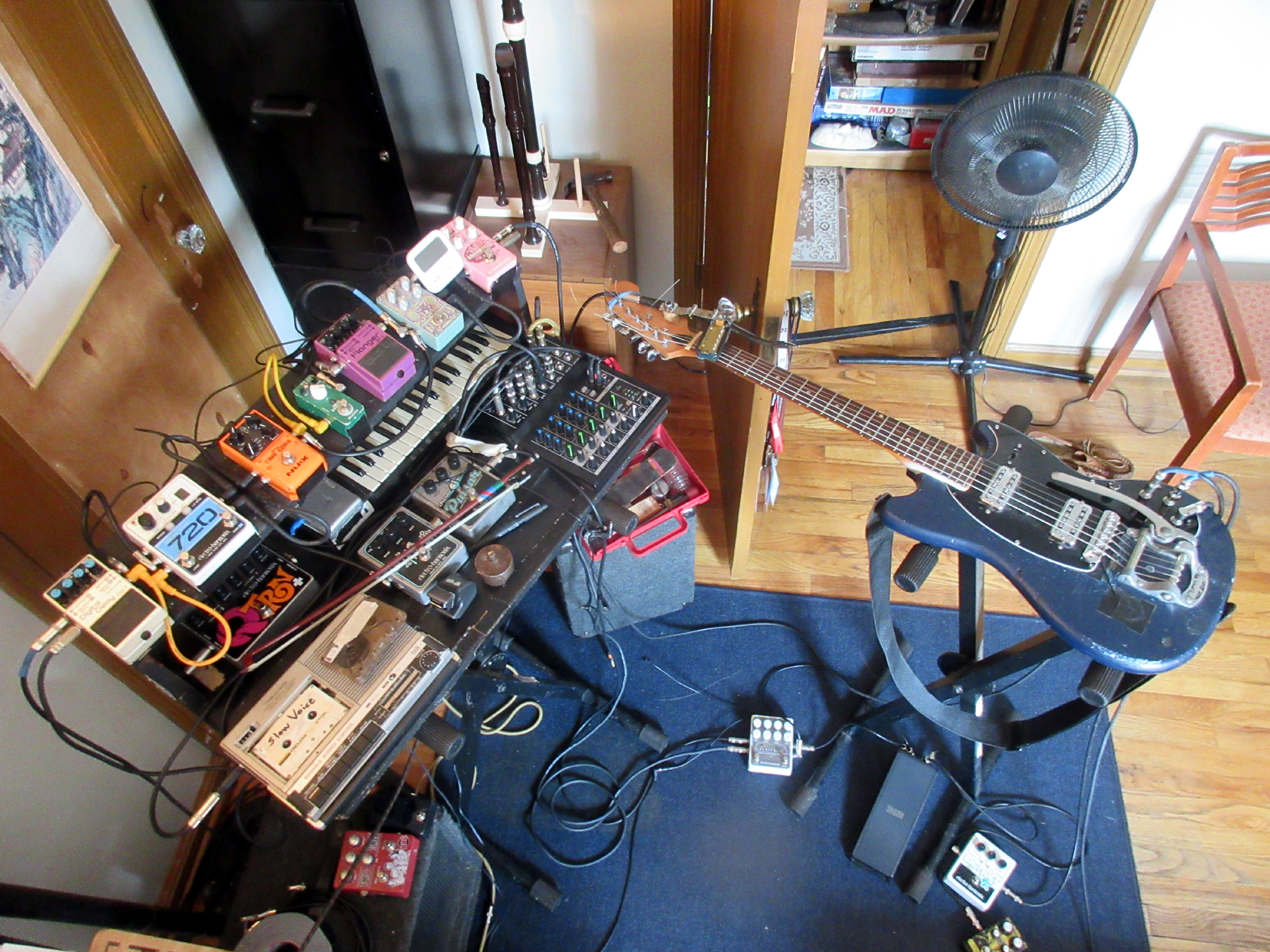 Is your live setup different from when you record, and can you talk about specific “prepared” techniques, and filters you use on the guitar? What’s your favorite effect?

The setup is the same, whether for Live performance or in recording sessions.

Prepared techniques I categorize as stationary or mobile. For example, I may use a stationary binder clip on a guitar string that is vibrating by the use of an eBow device. Other materials laid on the strings may be less fixed and move about as the string vibrates from the eBow. Gradual differences in sound occur with these mobile settings. I also use a violin bow, a capo, a comb, a restaurant-style salt shaker, various springs and screws, silverware, slides, chains and (very rarely) a guitar pick.

Much of the string sound is produced by my fingers and the use of a Bixby tailpiece. Strings are tuned approximately a 5th below standard tuning such that the “whammy bar” is capable of extreme pitch variation. String-sounds above the nut and below the bridge can be excited and picked up due to the piezo pickups at the Peg head and body.

Transistor radio and OGM tape loops produce an array of Found Sound. By placing the radio over the speaker of the Casio SK1 keyboard, a confused sonic reaction between the two devices occurs.

There’s great diversity between track-to-track on In the Moment. I was intrigued with the animal sound tape loops with guitar wobble on “The Zoo” (1984) which reminded me of your tape loop piece ” Switch the Topic” with Xanadu (1979) and some of the tape looping done earlier with Empool. Is there more of that style recorded and unreleased? Was the beginning of the mutiphonic guitar project with Empool or when you modified the Gibson Kalamazoo instrument as a tabletop guitar?

The animal sounds on the piece “The Zoo” are taken from the same tape that was used by EMPOOL back in the day – 1975 – from a special effects record. And yes, “Switch the Topic” with Xanadu is a good example of my interest in found sound and the use of prerecorded tape to enhance song material. Yes there are recordings using these methods that are not released. There are a few experiments from the mid-70’s that are essentially early attempts at what I do now.

The long eleven minute track “In the Skies and In the Stars” (2004) combines organized rhythmic loops and song structure in the middle section against a beginning and end which are more minimal with stretched out tones. Can you deconstruct the process of recording that specific track and talk about how you use structure in your work?

“In the Skies and In the Stars” started out as a submission for an art gallery opening in NYC by abstract artist Orin Buck. The sound was meant to be very minimal. I later developed the material embracing its very slow-moving structure. My decision making was intuitive like 99% of what I do. I don’t think about things beforehand so much. I simply react to what I feel is needed as the piece progresses. I added some very subtle analog synth and bass guitar – little additions that add to the overall sonic meaning of the piece. About 3 minutes into the piece, I inputted several rhythmic samples of sounds taken from the entirety of the piece and tapped out a rhythmic pattern on my work bench. The added lyrics and singing is definitely influenced by Brian Eno. 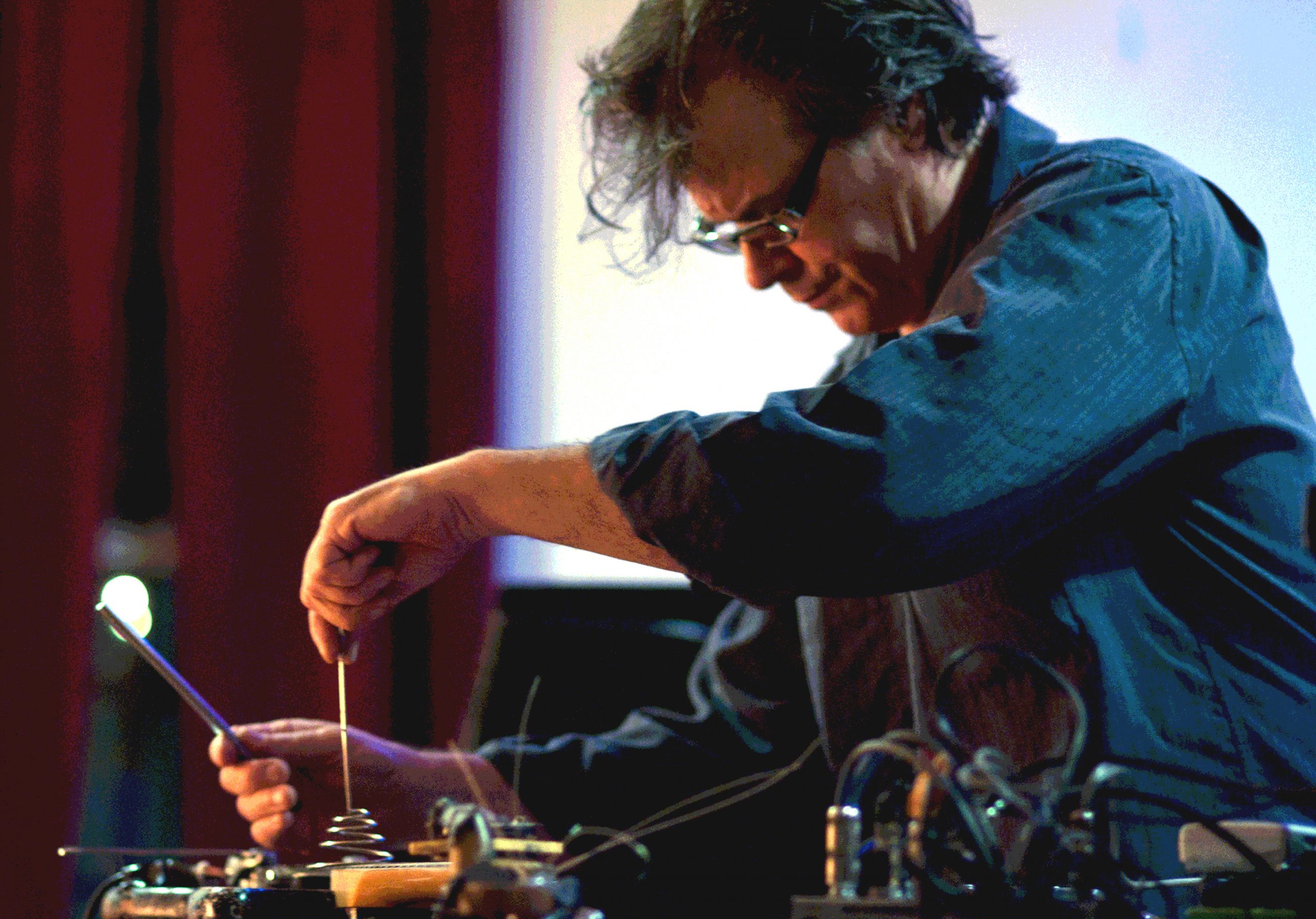 In the liner notes of In the Moment you write, “When creating spontaneous sound, with this instrument in particular, I view the process more as a visual artist than as a musician,” and that “At times I feel as though I’m leaving the room. This is when I know I’m on the right track.” Can you go further into that- -is there a physical sensation that happens in performance, and what do you look for in a good improvisation?  Can you discuss how visual art is put to use in the music– or does the music itself suggest visual scenes or color?

I’ve used artwork in the past to inspire me into improvisation simply by viewing the work (Sproton Layer even did this) or by devising it into a Graphic Score (The 4th World Quartet ). So, there’s been history there in my adaption of Art to Music. It seems to be a natural marriage of creativity.

I do not use chords or melody as in songwriting. The sound I create is more about shape and texture, hence my sense that it is more about visual art than so-called music. I paint shape and texture rather than formulate harmonic-melodic passages. Yes, the sound that comes out of my setup suggests visual scenes both in color and in high contrast B & W. The act of creativity is certainly more subconscious than it is conscious. What I play often surprises me and I “go from there.” These moments are when I feel I am “leaving the room,” the sound helps me depart from the physical space I am in. Structure is more about spontaneous evolution rather than Part A, B and C. That said, I do use specific motifs in my work (melody) as well as clusters of sound (harmony). And I do have perimeters I work with repeatedly, knowing what can come of certain approaches to the instrument and the wide variety of effects I use. There are sounds I can always count on.

Much of what I do is pulseless. Without a set pulse i.e. using 4/4 time meter etc., the “music” becomes more about atmosphere than location or position in time. Possibilities open up when there is less restraint on a steady pulse. Occasionally I do use a set rhythm, but it is more staggered rather than having a predictable figure.

Over the years, I have heard some amazing atmospheric ambiance from other sound artists. I am influenced by these folks as well as the sound of dump trucks, garbage disposals, and 747’s.

The interest in avant-garde and contemporary noise/rock music has always had a small but somewhat devoted (often fanatic) audience. Do you see that area having any growth or change since you’ve been involved in it for over five decades? Do you see the current vinyl revival as having any effect?

Sound-Art has more exposure now for sure. It’s odd, ya know. To a certain extent, I feel that playing in this field has reached a saturation point. What with all the diverse software and effects pedals out now, there are so many people doing it. When I toured a few years ago, I felt as if I might as well be playing in a bar band. Noisescapes felt like the norm. Everyone’s doing it. Obviously, it is far less popular than Led Zepplin, R & B etc., but…

The revival of vinyl and analog FX-processing is great, especially the latter. There are some astounding boutique effects pedals out there. I try to cover all the bases, keeping in mind that untreated sound has value too.

During the 90’s, sound-art, in general, started to take off. This century with its astounding technological advancements (laptops/software etc.), the sky seems to be the limit. That said, I’d prefer to see someone playing something akin to an “instrument” rather than just a laptop. I once saw a couple guys using a steel box with piezo pickups and vibrating mechanisms. That was well worth the sound.

What’s on your top ten list of favorite albums?

With Magnetic Fields Disrupted, Piper at the Gates of Dawn, Pretties for You, Lick my Decals off Baby, Another Green World, Messiaen’s Turangalila-Symphonie, Branca’s Symphony No. 5, Out to Lunch, Skies of America, Bitches Brew.

After my adoration with Syd Barrett, I was turned onto Derek Bailey. I loved the Music Improvisation Company LP. Fred Frith’s No Birds and Speechless are great albums. Adrian Belew does great work, but I find him pretentious. I saw AMM a while back. Loved their approach, but I don’t own any of their records. I have a hodgepodge collection of Hans Richel that is wonderful.