A Conversation about Scrap Book
with Visionary Collector Glenn Bray

Glenn Bray is an iconoclast collector and a publisher of the odd, overlooked, and fantastic in comic illustration and art. As a teenager in 1966, Bray’s first original artwork purchase was a Basil Wolverton Ugly Sticker drawing for $10 which led him into lifelong friendships with a wide variety of artists (besides Basil Wolverton), including Robert Williams, Rick Griffin, S. Clay Wilson, Harvey Kurtzman, Stanislav Szukalski, Carl Barks, and many others. 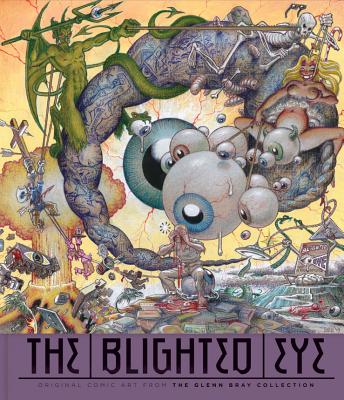 A sampling of Bray’s six-decade archive of original art was published as The Blighted Eye (Fantagraphics, 2014), a collection containing hundreds of entries from Charles Addams to Bob Zoell. Recently Bray began a project around his discovery of drawings made by Art Young (1886-1943) whom Bray called “One of the most revered and published American cartoonists before WWII, before he had fallen into the “black hole” of cartoon history.” Two more Fantagraphic books resulted; To Laugh That We May Not Weep: The Life and Art of Art Young (2017) and Art Young’s Inferno (2020).

As an addendum to Blighted Eye, Bray created Scrap Book—an oversized artbook formed out of news clippings, drawings, postcards, comics, photos, and odds-and-ends from his collection, all that was left outside the slick and glossy Blighted Eye. The collection is about the small and mostly portable ephemera that gets overlooked and stashed in dresser drawers for decades. Bray has an eye for curiosities we most likely would ignore or bypass. By bringing these images into focus we are learn something about ourselves, the speed of life, and the significance of the insignificant. 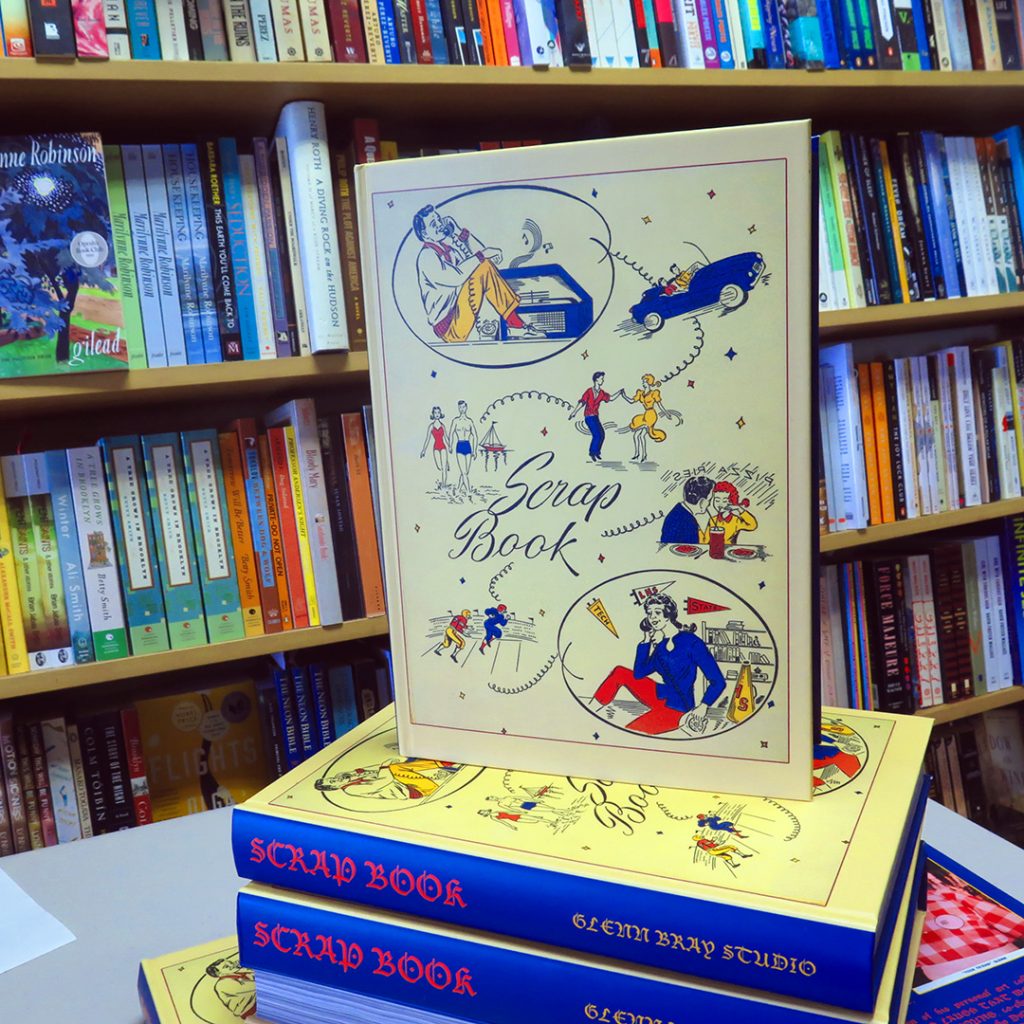 The first noticeable thing in Scrap Book is the lack of words. Except for some news clippings and advertisements, it’s mostly five hundred plus pages of imagery, usually one per page, and sometimes more from all eras of pop culture.

Scrap Book is a visual stream-of-consciousness that is organized carefully yet fights against the concept of organization—like a circus sideshow flickering in the mind. Scrap Book is a new and outrageous visual language in book form, an encyclopedia of wrong turns and hilarious sight gags–a bizarre graveyard for kitsch, anything freakish, alien, or in bad taste and a refuge for an ignored and distressed slice of Americana.

Scrap Book celebrates the weirdness of America—in archive of low-fi images set in free association, we can witness a collision of wayward pop-culture, memory, and the fantastical. As a servant to his own extreme visual appetites, Bray has become a public educator and defender of the forgotten fringe and the overlooked. His discoveries  help rearrange the discussion of folk art, illustration, mass media and art history.

Bray’s Scrap Book is analytical and glyph-like, even more underground and fractured than Blighted Eye. Looking closely, there’s nothing unusual in the methods of Scrap Book, because collecting and collaging in scrapbooks reached its zenith in the nineteenth century: a practice that took off when chromolithographs and mass media advertising first took hold. It’s sources are common everyday life. Scrapbooking is a reflection and diary of the creator, preserving something of the time and world they lived in.

Many people clip and save odd news items but with Bray, it’s the sheer abundance of material, his skill is in the attention to detail in micro-curation and presentation, a blended aesthetic of high and low that lifts the hobby of paper clipping from a diary to the level of art. In thousands of small ways Bray has taken an axe to pop-culture and opened an aesthetic display of our American neurosis.

Scrap Book is almost beyond description. It’s a highly personal journey, part autobiography part nightmare–and an endearing, homemade, crackpot-vision by one of the most important collectors of today.

The following interview with Glenn Bray took place during the first week of May, 2021. All images are from two page spreads in Scrap Book. The book is available at Book Beat or from Glenn Bray’s studio. 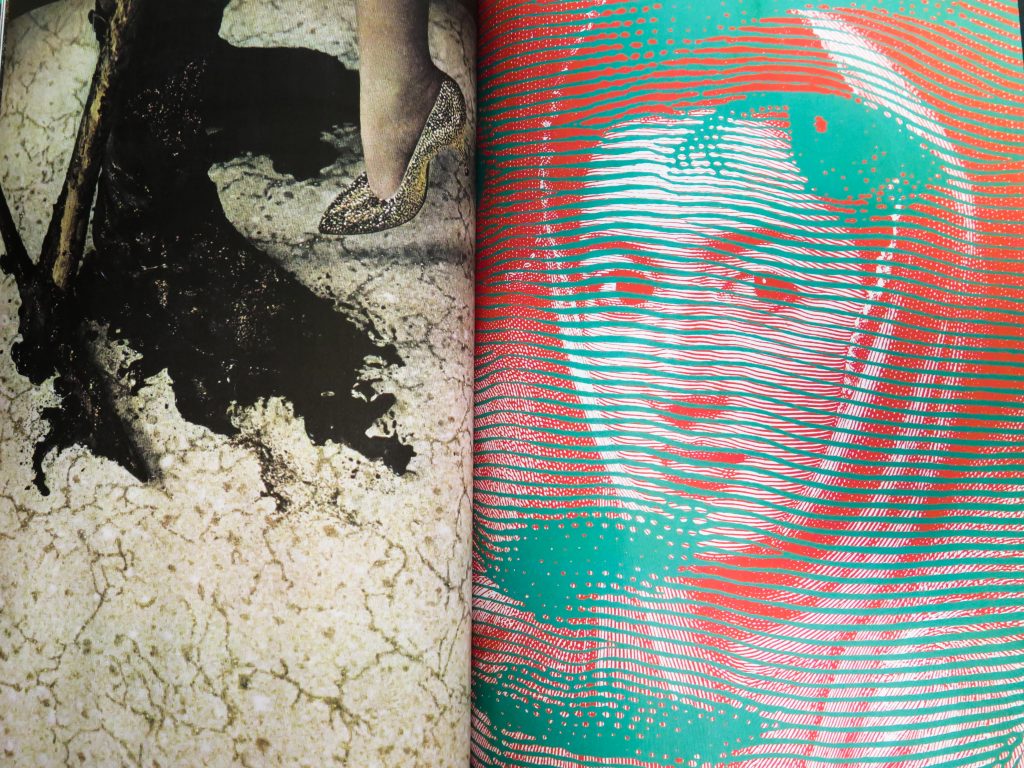 Can you describe any principle or methodology you used in creating Scrap Book?

In one way I hate “spilling the beans” about WTF Scrap Book is or is “intended to be.” It just IS, is enough for me.

But I will spill here, knowing that not everyone who has the book will see this interview anyway. I started putting together old scrapbooks, those big old 1940’s and 1950’s books with blank pulp pages tied together with string that contained the worst level archival pulp paper imaginable, back in the late 1960’s. You could buy these old scrapbooks at the Salvation Army for $1.00, and sometimes they even were half-filled with other people’s cut-outs. (And yes, I DID save and print some!)

I was collecting a lot of comic books and magazines at the time, but a lot of other zines and newspapers that were passing through my hands didn’t need complete saving; maybe a photo here and an article there. I would cut them and save them in a pile until I thought I had enough to combine some sense of imagery on a few pages. This lasted way until the late 1990’s, and possibly a bit beyond, when by then you could just save image files on the computer.

I must have had at least a dozen different sized filled scrapbooks by the early 2000’s and the paper was starting to mummify, also killing off my saved cargo, and I realized that in a few years they were going to turn to dust.

So I scanned most of the pages, bought some really nice paper and went to STAPLES with a flash drive and told them to just run half of them through the printer, turn them over and complete the printing on the other side. Voilà!, beautifully preserved prints. I had the one copy bound by a professional bookbinder and put it on my shelf.

Over the years, visitors would look at my one copy and ask if I couldn’t make another for them.

Working with Frank Young as co-editors on the Art Young book, he had sent me some print-on-demand books that he had produced. He convinced me that I should also do one. With fresh eyes on the old pages, I was able to re-direct/re-arrange the pages in a more meaningful way, plus add a lot of stuff that hadn’t found a place in my Blighted Eye book. 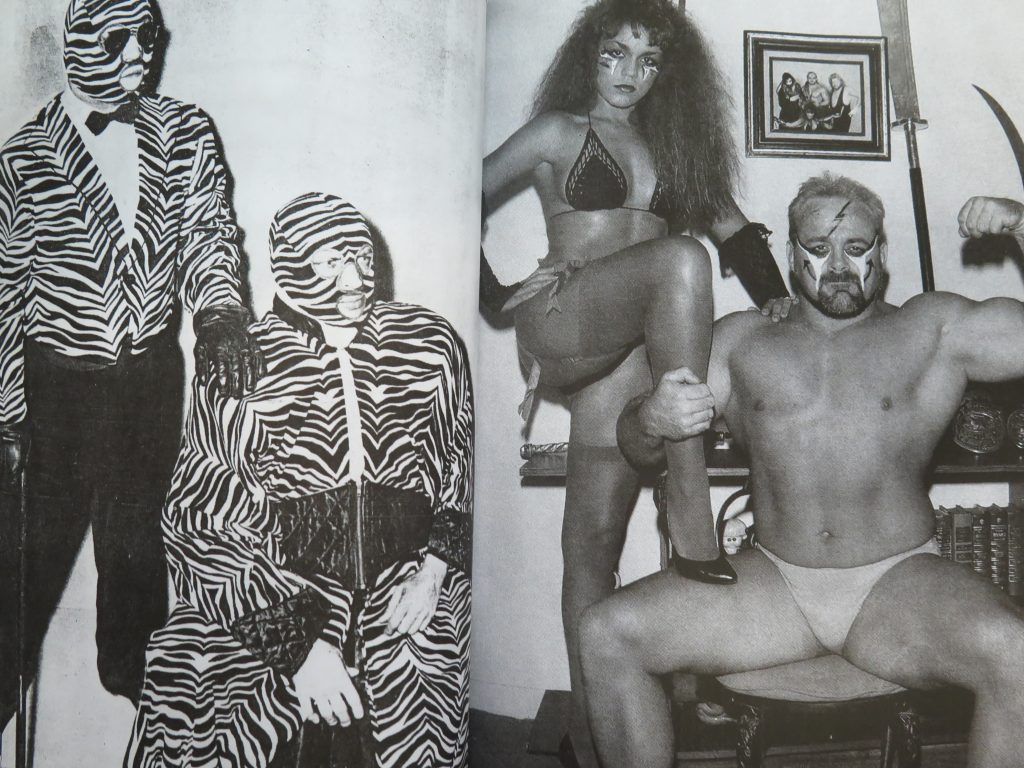 Scrap Book overflows with visual information, yet still retains a highly personal viewpoint. In your interview in Blighted Eye, you mention your attraction to the grotesque, which you called beautiful. That quality is also evident in Scrap Book, not only on a personal level but also from all the weirdness produced in America. That weird quality you present has been slowly fading away from culture. I’m wondering if you could riff or speak on that and your attraction to these areas of culture that are becoming lost and forgotten.

This I cannot answer, except for that I only know what “appeals” to me visually. Harvey Kurtzman instilled in my 8-year-old mind my sense of visual absurdity and questioning of authority after I had gotten a complete set of MAD comics bound in notebook binders. 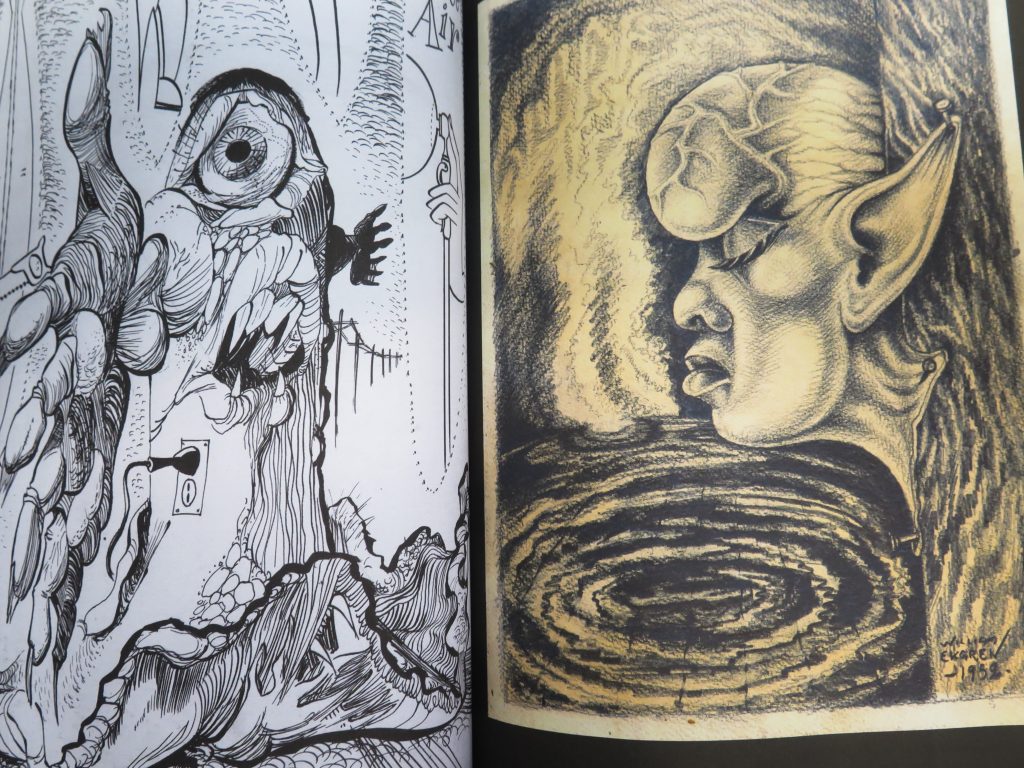 Blighted Eye was a look at the physical artworks in your collection and was carefully annotated and organized. Those personal connections you shared with artists were meaningful and a major theme in the book. The kind of collecting and relationships you once made doesn’t seem possible anymore. How do you see collectors as having an influence today on artists and culture?

The old days of actually physically meeting up with some artists are impossible, and probably for good reason. It was a different era when I would take Basil Wolverton or Carl and Gare Barks out for lunch, or meet Freddie Blassie at Muscle Beach in Santa Monica or chat with him outside the Olympic Auditorium in the parking lot. But after the Struggle doc came out I’ve had (too many) people phone or even show up at our front door wanting to be new friends.

Collectors can sometimes influence artists by showing them work of obscure artists they had never heard of before. Collectors also influence other collectors. I couldn’t have discovered all my favorite artists without help from others. The conversation between all helps raise awareness, and maybe eventually influence culture. 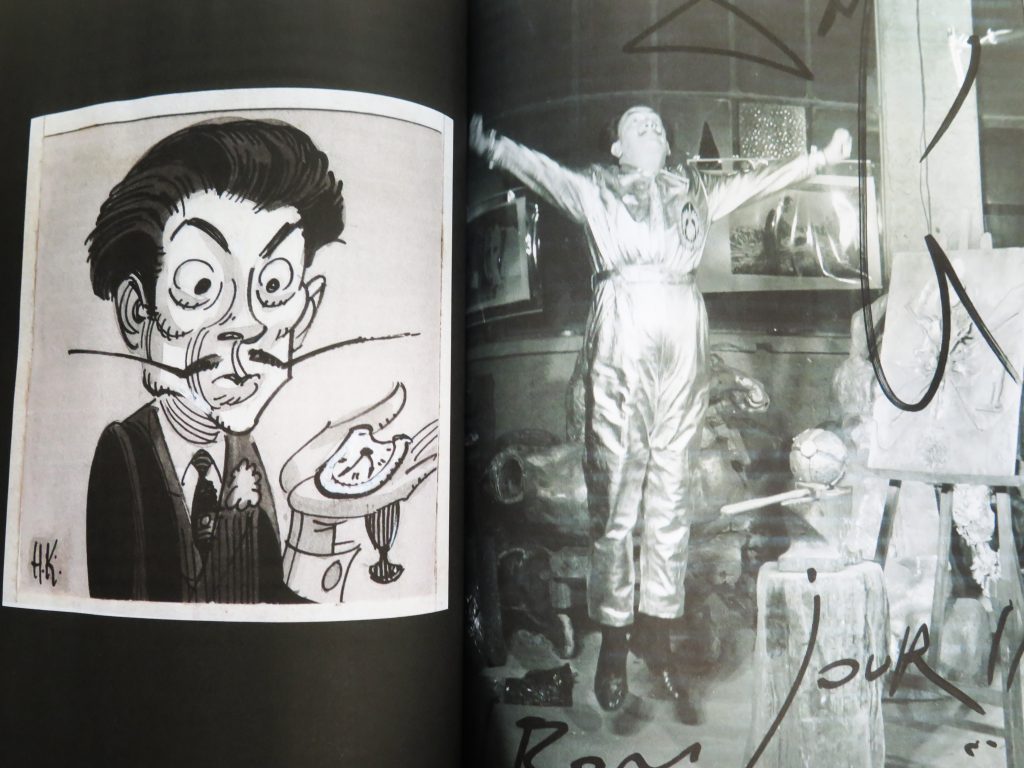 With Scrap Book you’ve also created a book for artists to use—a kind of reference or visual index to share with like-minded artists and collectors. I’m wondering if you had an audience in mind or if this was a wordless version of Glenn Bray’s biography?

The stuff that started to interest me as a young culture-vulture still interests me, although I hopefully have matured in my collecting. The more you see in your life, the more you can edit out the now redundant. Getting rid of lesser material makes for the better end-game. 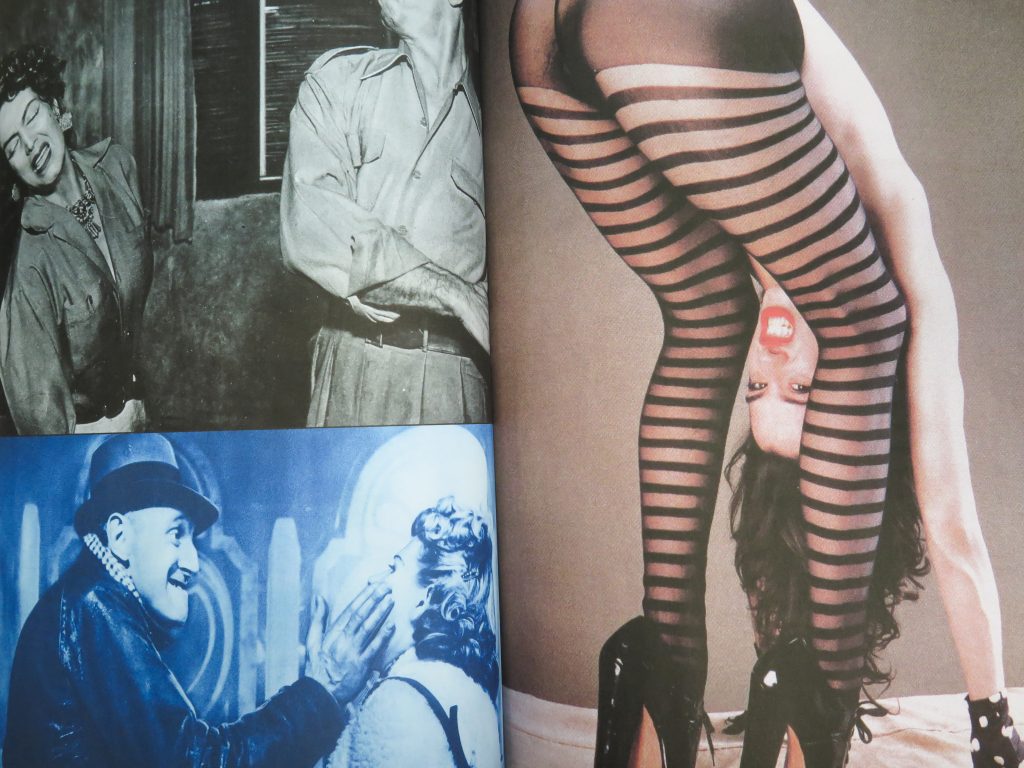 On the back cover of Scrap Book you write that the book’s contents were “largely from pre-computer digital-age hand-collaged scrapbooks from the 1970’s through the 1990’s” and now “modestly updated with additional visuals.” Your form of collecting was self-taught and unique. I’m wondering if you see your curating and creating collections as a form of artwork in themselves? If collecting is a form of art, does it make a difference if collections were all digital?

That “art” and “artwork” label means so little anymore. These days, my trashcan is ART if someone who’s labeled ARTIST says so. When I was a teen and saw my first Salvador Dali’s at LACMA, I asked “Where are the Basil Wolvertons?”

With younger people being weaned on the computer screen, and not having been bathed in the proper smell and texture of paper, I don’t think you can eliminate the success of the digital age. 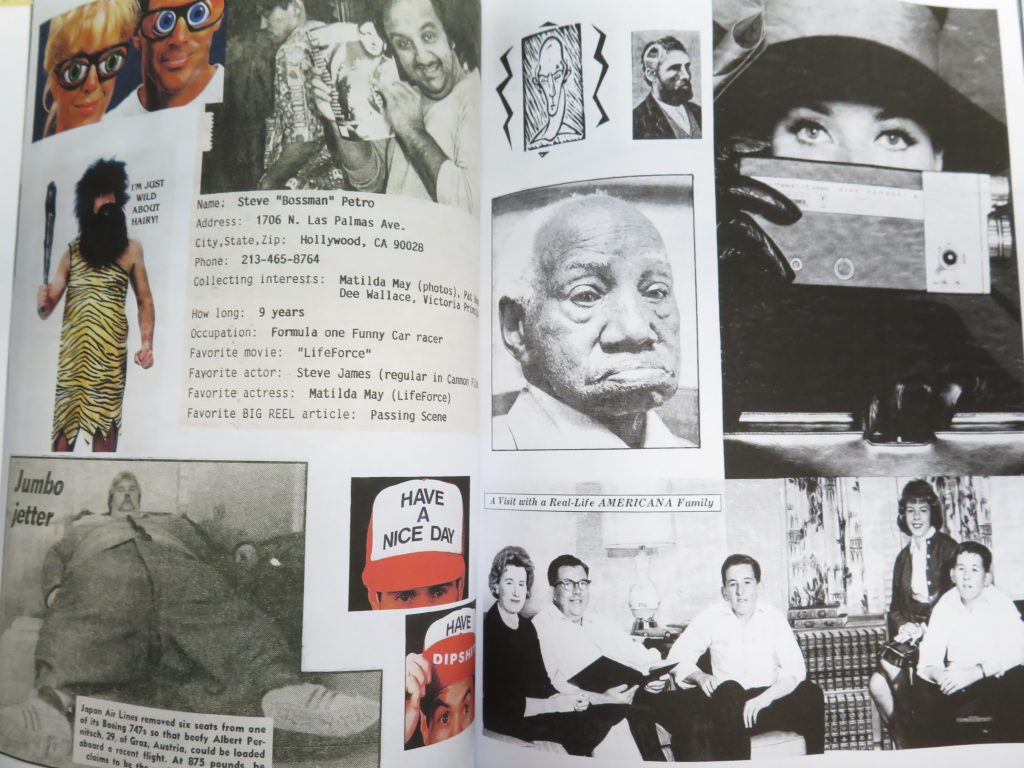 Many of the Scrap Book layouts set up interesting associations across the two page spreads. There’s a lot of strange conversations going on between pages. Was that always intentional when you began your scrapbooks or done while creating the book?

Yes, in the new printed version. The old original books were done over 20+ years, so there were images pasted in decades earlier that needed current match-ups. 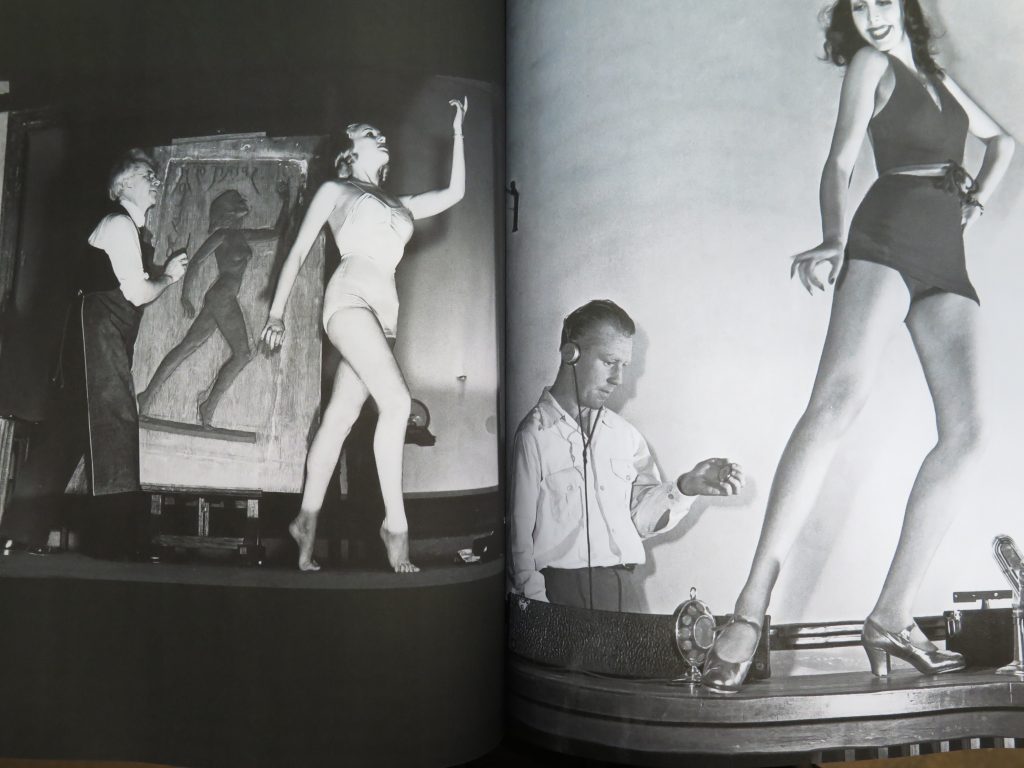 Scrap Book contains many unique artworks, letters, and ephemera. It’s open-ended and silent nature creates many unanswered questions. All the stories and comments you made in Blighted Eye were key to understanding that book. Would you ever consider writing a commentary to Scrap Book?

To be honest, I think that would objectify it and completely have it lose the wonder. So far, I’ve had a few people react to pages that I wouldn’t have second thoughts about, which is good, because they might not have if my commentary had sent them in another direction. 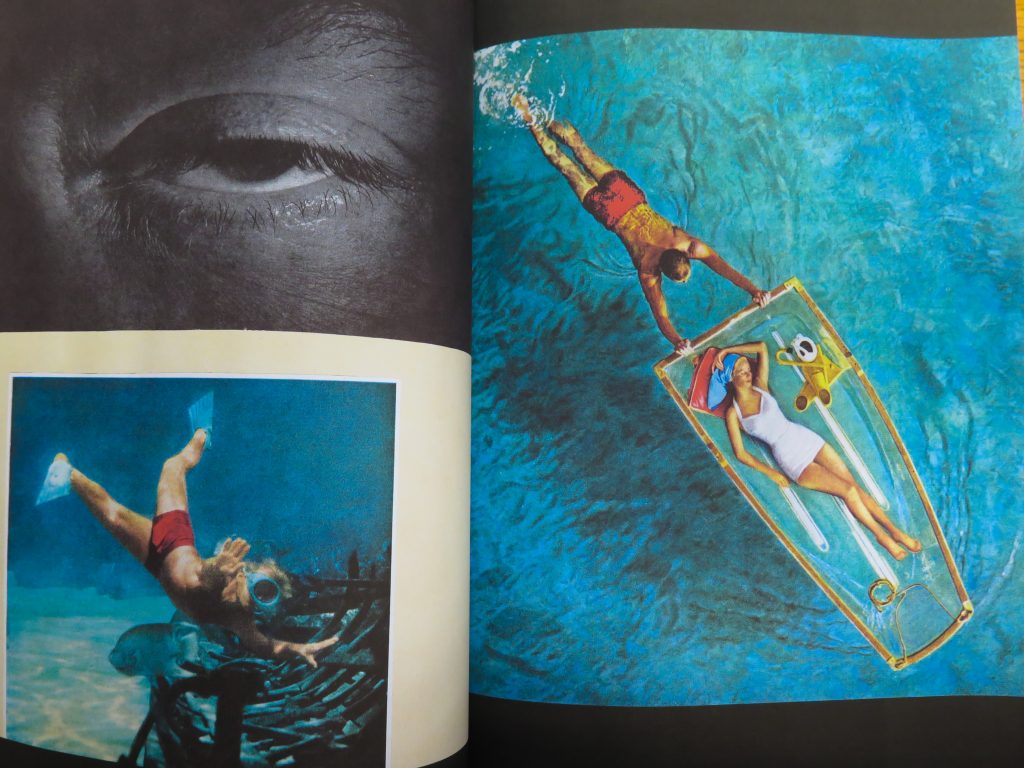