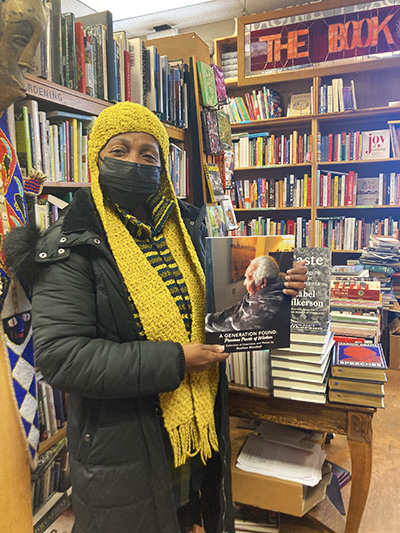 While watching a Sunday episode of American Black Journal, I heard Roohee Marshall describe her mission of publishing a book on African-American elders set into motion while watching a 93-year-old Inkster women cutting the grass on her front lawn. “She was beautiful. She had brown skin, silver hair, 93-years-old and cutting her grass,” said Roohee,”I began to talk with her and immediately I felt connected to her and I began to feel my elders through her…and I began to feel better, and I thought there must be other outstanding elders throughout the world that I probably need to seek and find….” The episode of Black Journal also featured Roohee’s subject, the beautiful Carole Hall, who described her life growing up on Hastings Street in Black Bottom, and how the project was “An unexpected excitement in my life…”

A Generation Found: Precious Pearls of Wisdom features photographs and interviews with seniors from Chicago, New York, Natchez, New Orleans, and Washington D.C., with almost half of the 40 profiles taking place across metro-Detroit. Filled with photographs, advice and insights from what many have called “the silent generation” –they are silent no more. Rich in insight and grace, A Generation Found is a wonderful giftbook to browse and reflect. Copies are available at Book Beat, or online at: Book Beat gallery. The following interview with Roohee took place by email in February, 2021. Roohee generously shared images from her own family album and provided  her own captions.

I’m fascinated to learn more about your early life in Natchez. Can you describe what Natchez was like growing up in the 50s and 60s? — and what was it like attending the University of Southern Mississippi — was there a strong sense of activism and protest? And how did you end up raising a family and settling in Ann Arbor? 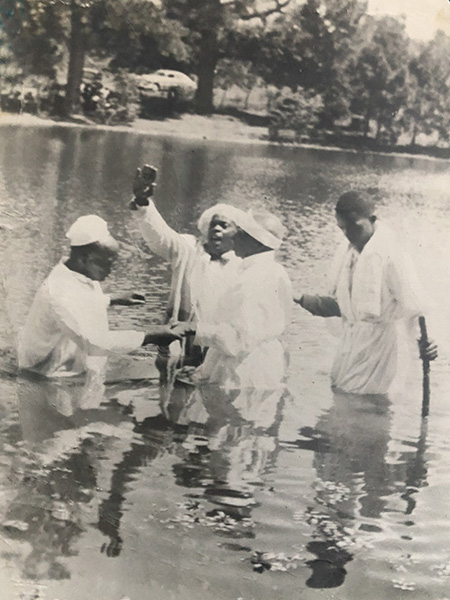 “Granddaddy Rev Levi Marsaw & Elizabeth Marsaw. My grandfather pastored 4 churches and I went to each church frequently. In this picture he is baptizing in Natchez in a place called ” under the hill” at a small area in the Mississippi River. I remember visiting him often, sitting on the front porch swing and brushing his soft grey balding head. I remember the sweetness from his plum, fig and peach trees. He named me dollbaby. His word was king.” –Roohee Marshall

I grew up in Natchez Mississippi, a small city on the banks of the mighty Mississippi. That River is a place of inspiration for me. Growing up, I used to fish there with my father.. I would bask in the sun. It was the best of times and I felt completely free. Then my mother passed when I was nine. She was twenty nine. It was my saddest day. The elders stood in and laid a solid foundation built on devotion to family; they cared for the sick and young, distributed food to the community and made sure we understood the meaning of sharing. No one was a stranger, everyone spoke and we played outside from sunup to sundown. They prepared food from fresh gardens we always ate together. They cooked food that healed our bodies and our minds. They taught us the meaning of living a purpose filled life by their example. They worked hard and paved the way, we learned work ethics, they fought for justice and a better life.

My grandfather pastored four churches in four small towns in Mississippi. Amidst the trying times in Natchez they prepared us for life. They always reminded us of the sunshine. They stressed the importance of being grateful for life and the value of always telling the truth. We grew up hearing stories from the elders; how they worked long and hard as a community to make sure everyone had the best life they could offer. We understood self-reliance and survival. Resources were not very plentiful in Natchez so families would come together to create our own way of life and support each other.

The Klan was very prevalent in Natchez. I can remember during the civil rights movement hearing my family at night calling from house to house saying” the klans are riding tonight, turn your lights off”. I remember the Klan’s riding in the parades in their KKK robes. We were instrumental in helping to integrate the schools. My cousin was very active in the NAACP and as a result he was targeted quite frequently. He told us stories of his friend who was tarred and feathered. He spoke about the lynchings. One of my friend’s father was bombed when he left work, he was a member of the NAACP. We drove by to see the car, it was traumatizing. The elders instilled remedies for life so we could survive in the darkest of times. There was a branch in Natchez for University of Southern Mississippi, I was not very inspired, there were so many memories of Natchez segregation, integration, degradation, miseducation. The elders tried their best to ease the pain of the truth of that reality as we grew older. There remained many images in my mind of the beautiful oak trees and shadows of my people hanging from the branches and the contrast of the beauty of the Mississippi River in all of its might.

After I was married we moved to Ann Arbor so the children’s father could attend the University of Michigan to complete his Masters in African and Middle Eastern Studies. 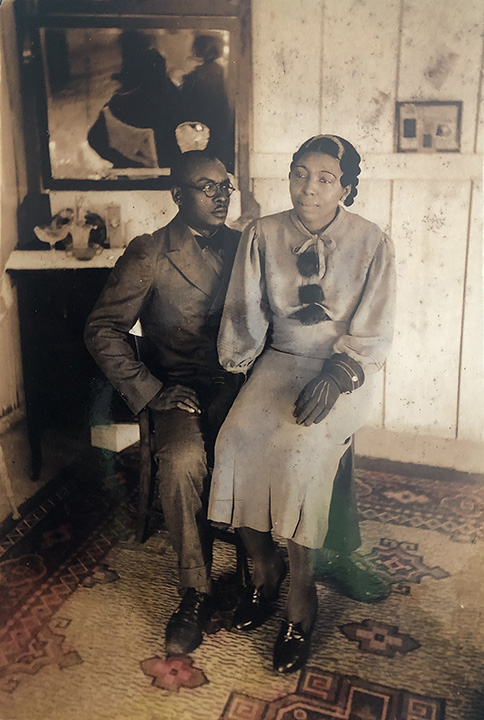 “Great Uncle Fayette Marsaw & Aunt Alice, My grandfather’s brother and his wife.
We used to visit each other often. I remember his large garden and how he loved his farm, I loved his warm wooden stove and how they were so in love. He used to haul cotton and carried workers to the fields to pick cotton. He would give people rides to town and hauled produce to make a living.

Your biography mentions that you’ve been in the health field for 30 years. I was wondering what your project may’ve uncovered in terms of health and vitality. I noticed how few people complained about their aches or pains — which I thought would be more common. Did you notice any health or special eating habits — or was it all about having good genes?

It was so inspiring to see all of the elders in a complete healthy state of mind, the majority living in their original homes. They all had a presence of contentment and a life well lived. They stressed the importance of fresh food, eating healthy, exercising and taking one day at a time, being mindful of what you think, being authentic. They talked about not allowing yourself to be over stimulated by life. They mentioned the key to life is service. They spoke of the importance of not being depressed. As Mr. Timuel Black said, “We grew up during the depression, but we were not depressed, we had a strong sense of commitment to community, we had laughter, music , family….” They spoke of how caring for others helps to increase your blessings and life. Genes always plays a role.

It was great to see so many Detroit seniors included in the book. Were there any interviews that surprised you — that stood out, or challenged your assumptions about seniors or Detroit?

I was especially inspired by Detroit’s poet laureate Ms Naomi Long Madgett, educator. As I sat with her in her home, her sacred space, I was completely mesmerized by her energy at 95. She was so dedicated she walked to her computer and showed me a silent video of her and her family at 3 years old. She was so very sharp. The fact that she knew Langston Hughes, and her contribution to African American Studies at various universities. I gained strength from all of the elders, Ms. Bayyinah Pasha and her success in real estate, her beauty. Ms. Carol Hall has been fighting for justice and equality for decades. They were all outstanding. 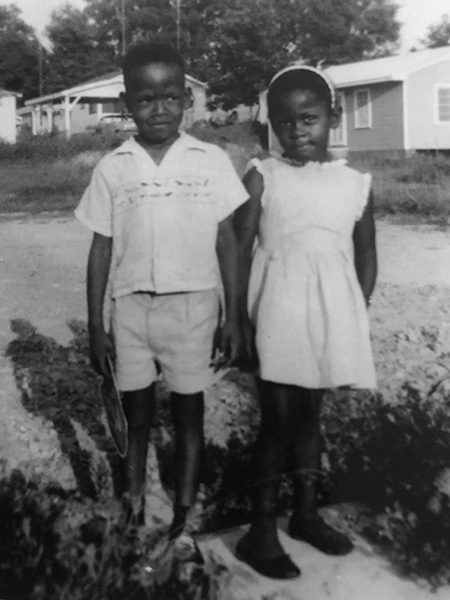 “Yours truly me (Roohee) in Natchez at five with my cousin Bunchy who was visiting the family from Chicago which has been a huge part of the tradition even today, relatives coming home from the North to the warmth of the elders and community.”

Faith and religion was one common element among many of your subjects. Can you speak to that devotion — and its relevance for younger people today? How has the project affected your own life, and have you made any changes in your life from what you’ve learned.

All of the elders spoke of their connection to the creator, they had a strong sense of dedication to prayer, to God. They all embrace religion within their own definition of spirituality; it is essential and crucial to the survival of all of humanity, to this they all agreed. The experience has certainly increased my awareness and faith. It has helped me to understand that everything is truly in divine order. I have witnessed this through my own family and through our beloved elders within their grace and consistency.

The design for the book is unique. How did you decide on the solid black backgrounds and white ink? It also seems like a difficult design for a printer to accomplish but they made it work!

I had an image in my mind of how I wanted the book to look, I saw it as a coffee table book. When I took the picture of Mr. Knowles, I knew that picture had to be my cover, everything just fell in place. I presented a rough draft of a proof that I created, my layout idea and vision to an amazing company, “Standard Printing” in Ypsilanti, MI. They were incredible and I was very pleased with the complete process.

I noticed on your website that you’re working on a book called “1000 Doors to Morocco” — can you discuss what that project is about ? –do you know when that will be coming out? And are there any plans for a sequel for “A Generation Found”?

I traveled to Morocco in 2016 and visited 6 cities there. I was so inspired by the doors’ artistry, the design and the lifestyle of the people. I took pictures of about 500 doors. At the time I had not decided to do a book. When I came home I looked at the photos and decided I wanted to share my experience and the beauty of Morocco. So I did a first proof, and now the book is at the same printing company soon to be released. I put a hold on “1000 Doors to Morocco”, to work on and complete “A Generation Found: Precious Pearls of Wisdom”. I am on my 3rd interview for the sequel for “A Generation Found”, which will be an International version.

Signed copies of Generation Found: Precious Pearls of Wisdom can be found at the Book Beat or in our online gallery.