Dale Carlson is the author of Corrado Parducci: A Field Guide to Detroit’s Architectural Sculptor, a valuable reference on the artist’s work. A second updated edition was recently published and we wanted to ask Carlson a few questions about his book and the work of Parducci. All photos in this interview are © Dale Carson, 2019, 2020 and used with permission.

1. When did you first get interested in architectural details and how did you discover Parducci’s sculpture?

In the early 1990s while a student at Michigan State University in E. Lansing I began travelling to Detroit by car on a weekly basis, primarily to experience the city’s Techno and House music scenes that were exploding at that time. Oftentimes, my visits to the city would stretch into entire weekends. It was during these early visits that I first began to take an interest in the urban landscape that was so different from my hometown of Traverse City. Also around this time an acquaintance of mine, who also grew up in Traverse City, was attending the University of Detroit in an architecture program of some sort. I happened to run into him in the city purely by chance one day around 1993 and he recommended I tour the Guardian Building, a structure that I had never heard of until that moment. I followed up on his suggestion and my first visit to the Guardian was surely a watershed moment that greatly deepened my interest in Detroit architectural history. Shortly thereafter, probably around 1994, I purchased for my mother a birthday gift, “The Buildings of Michigan” by Kathryn Bishop Eckert, that I promptly borrowed and never returned. I spent a lot of time travelling the state back then, between Traverse City, East Lansing and Detroit and I would take this book with me just about everywhere I went, seeking out the structures enumerated within. It had a colossal influence on my development as an architectural historian. Frankly, I idolize Eckert a bit. Her book is also the very first media outlet that exposed me to the name of Parducci. As I learned more and more about Parducci and how insanely prolific he’d been here in the Detroit area, I became frustrated with the great amount of writing about him that made specific mention of his “600+” commissions but with no accompanying roster of said work. It wasn’t until over a decade later that an opportunity to mine that cavity presented itself.

In 2007 I purchased my first digital camera and began to photograph and catalog significant constructions in Metro Detroit in earnest. As my archive grew, I sought out an avenue other than social media platforms in which to present my photography and research. With the help of friends, in 2011 I launched a website called ilovedetroitmichigan.com that I still run today. As I published more and more content regarding Detroit’s architectural history, I began to receive occasional inquiries and additional info via emails from other area architectural historians, and also to develop regular correspondence with some of them. One of these contacts, Einar Kvaran, my co-author, eventually revealed to me that back in the early to mid-90s he sought out Parducci’s son Allen, found him, and that Allen had allowed him to make photocopies of Parducci’s original studio ledgers enumerating the 600+ commissions that I had long read of. The moment he told me this, probably in 2012, I began planning my Parducci book. My late wife got cancer and passed away in 2014 and 2015 respectively. I cared for her the whole way through, 16 months. I also attended photo school at Oakland Community College in 2018-2019, with the intention of improving the book’s photography, and ended up reshooting the entire project throughout 2019 with much greater skill. So that’s why it took me eight years!

2. You cite 371 sculptures by Parducci in your book, has the attribution been a difficult process? Are you finding more to discover?

Developing attribution cases for our Parducci book is easy in some circumstances, and not so easy in others. You have likely noticed that we have even included a handful of commissions that we rate as “speculative” (though we believe the circumstantial and anecdotal evidence to easily be strong enough to warrant their inclusion in the book). I constantly try to drive home the point to those interested in this kind of research that, in the field of architectural sculpture, almost any attribution is debatable, even those that appear the most iron-clad. The vast majority of practitioners employed assistants and apprentices to whom they often passed off less prestigious work. Architectural sculpture was also very frequently sub-contracted. So attribution counterarguments, too, can always be developed if one is so inclined. Within Parducci’s ledgers, structures are usually referred to specifically, but in many cases the descriptions can be genericized, so one must use inductive and deductive reasoning in determining Parducci’s intent. Fordson High School in Dearborn, for example, is listed simply as “Ford School”, and determining this entry in the ledgers to correspond to the Fordson High School is largely a matter of chronology. It’s also very common for Parducci’s ledgers to cite a structure’s former name, so there’s a little more figuring one has to do for themselves when examining them. For reasons such as these, in some cases the degree of an attribution’s certainty is less than it is with others. In any case, we would be able to develop no attributions for the vast majority of the commissions cited in our book without the ledgers guiding us, as the specifics of Parducci’s commissions were hardly ever covered in newspaper accounts, and the two interviews we have to draw from enumerate only a 100 or so commissions, tops.

3. Do you have any favorite works that stood out as exceptional for their beauty or strangeness? I was fascinated to learn about his work on Masonic Temple and all the interior rooms. Where there any details revealed about that project that stood out to you?

I have a lot of favorites. The Masonic Temple (1920-1926; George D. Mason, architect) almost goes without saying. Definitely among the biggest and most elaborate commissions of his entire career, and arguably one of the main reasons he came to Detroit in the first place…. 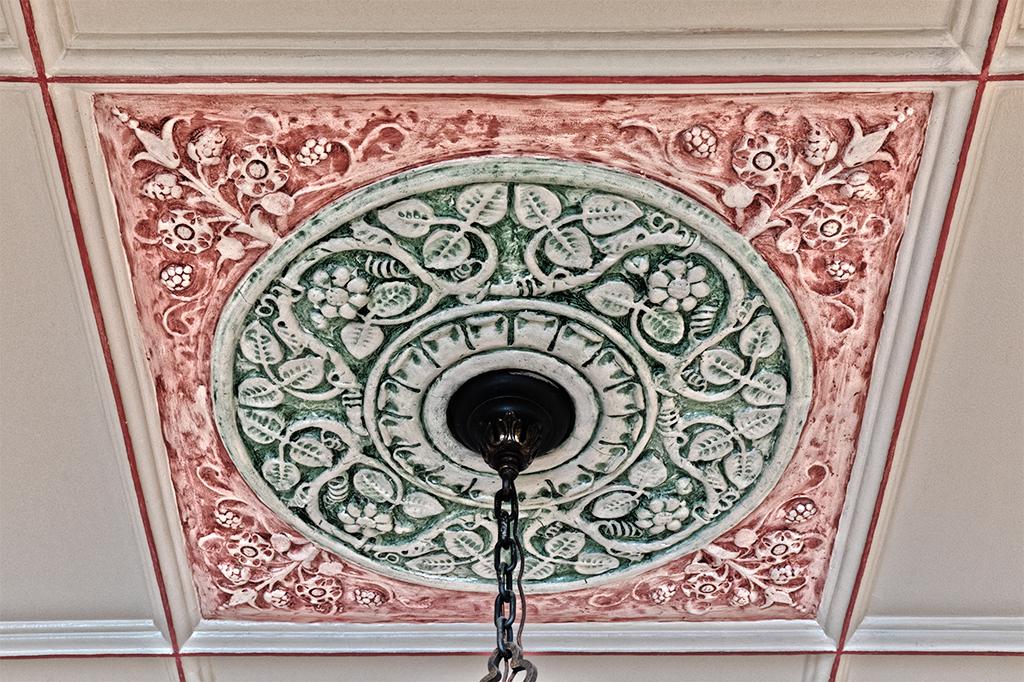 For it’s anatomical precision and historical significance, I love Parducci’s rendering of Wirt Rowland affixed to the exterior of Kirk in the Hills (1951-1958) in Bloomfield Township. Parducci and Rowland were friends in life and I believe you can sense Parducci’s great respect for him in this piece. Rowland was a primary designer of Kirk but died before it was built. George D. Mason’s company, which continued operating after Mason’s death, served as the architects of record….

Photo by Dale Carlson; Kirk in the Hills, Bloomfield Hills, 2019

As a part-time resident of New Orleans, I love his contributions to the 1951-1953 Wogan & Bernard designed addition to Jesuit High School in that city….

A commission just absolutely loaded with Italian-American architectural history significance is the Maguolo Family Memorial (c.1975) at Calvary Cemetery in St. Louis. The St. Louis based architectural firm of Maguolo & Quick commissioned Parducci numerous times over the course of his career. The “Fiorina” (née Lachin) noted at the cross’s center, who married into the Maguolo name, is the great-aunt of a New Orleans based architectural sculptor that Parducci’s brother Rudolph worked for in the late 1920s…. 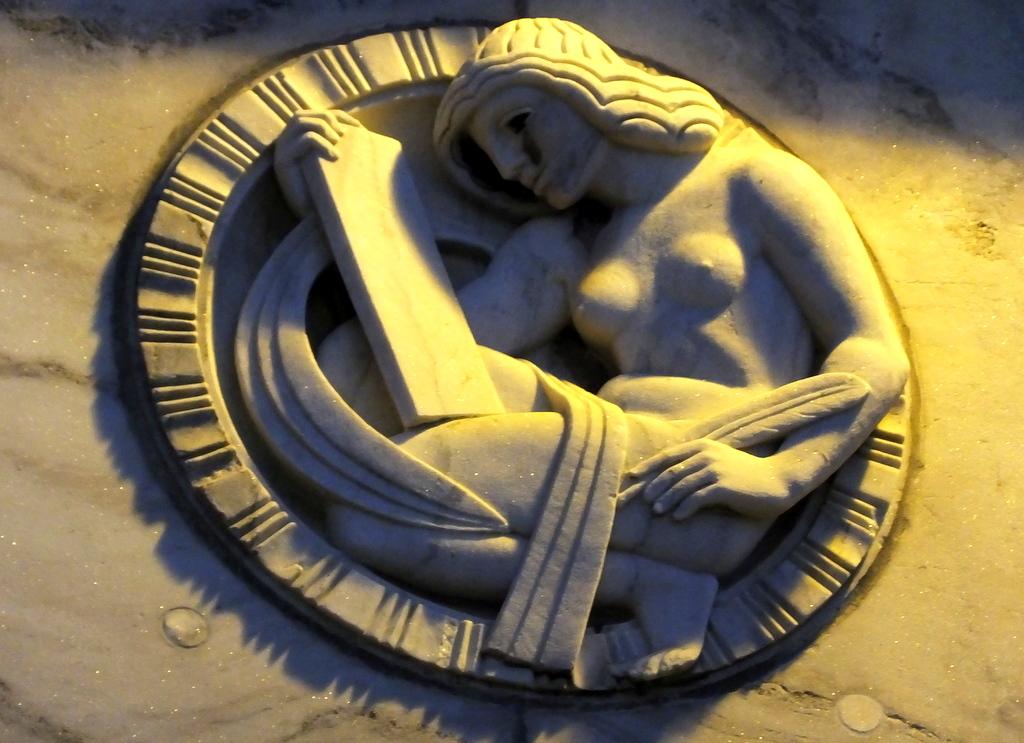 I could go on and on with favorites all day long. Just a couple more… New York Times Printing Plant, Brooklyn (1929; Albert Kahn)…. 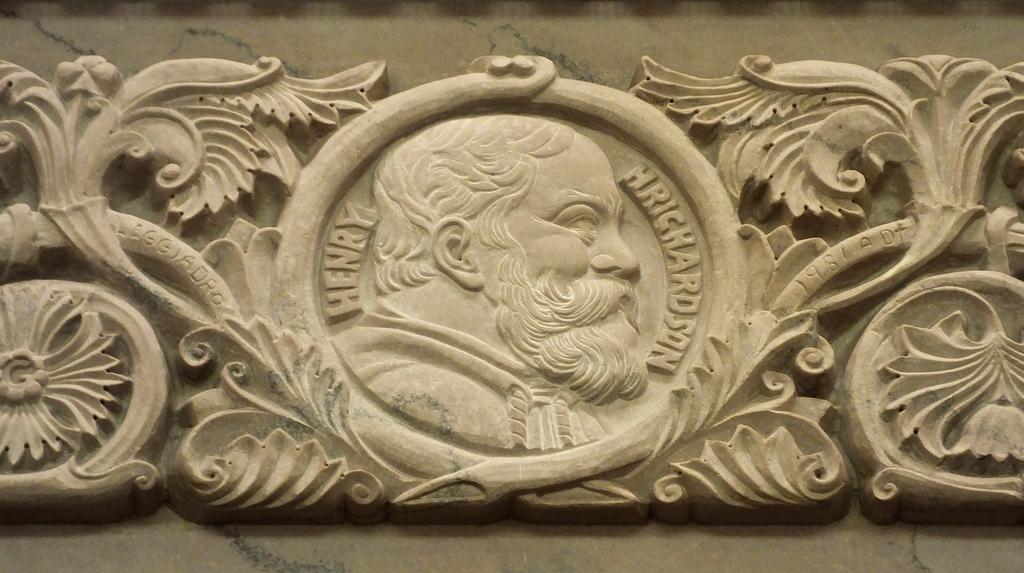 New York State Capitol Senate Chamber (1881; Parducci’s contributions: c.1978-1979). Another commission just absolutely loaded with architectural/historical significance. Stanford White designed this chamber while in the employ of the Capitol’s equally legendary primary designer, Henry Hobson Richardson, and White was also a teacher of one of the masters Parducci apprenticed under, Ulysses Ricci. Interestingly, the stone carver saw fit to chisel his name into Parducci’s design, which is quite uncommon…. 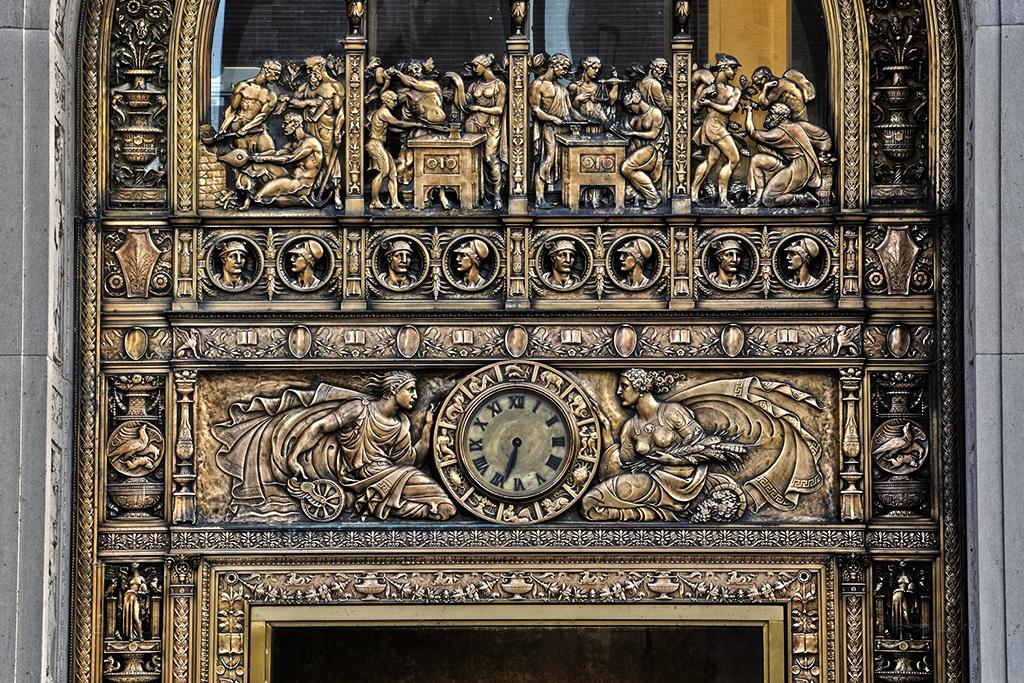 And finally, a stunning apprenticeship era piece in bronze for the First National Bank Building (1924; Childs & Smith) in Davenport, Iowa. Cast by the John Polachek Iron & Bronze Co. of NYC; most likely executed through a subcontract from Adolph Weinman, a much more famous architectural sculptor than Parducci, to his second master, Anthony DiLorenzo…

4. I imagine people could and do use your book as a touring guide to these wonderful locations around the city. What would be your suggested tour route of Parducci sculptures if you had just one day to spend in Detroit?

The single most important concentration of Parducci work anywhere is in Detroit’s Financial District and downtown in general. I would recommend this chronological list for a walking tour, but not necessarily in this order:

A. Detroit Free Press Building (1923; Albert Kahn), 301 W Lafayette Blvd ~ Most of the sculpture here is attributed to Ulysses Ricci, one of the two masters under whom Parducci apprenticed. A 1953 edition of the Free Press attributes the florets in the arched loggia ceiling to Parducci, which makes sense when looking at his apprenticeship timeline, and when considering what elements of the sculpture here might a master delegate to an underling. This building offers a great opportunity to consider Parducci’s apprenticeships and the master/apprentice relationship which was still an oft happening thing in Parducci’s youth.

5. Have there been any discoveries you recently found that you’d like to include in a future edition of your book?

I have over 10 commissions already lined up for the third edition that I plan to publish in 2023. Here’s one that I photographed just the other day: Robert Oakman School (1926; Van Leyen, Schilling & Keough), 7545 Chase Rd, Dearborn…. 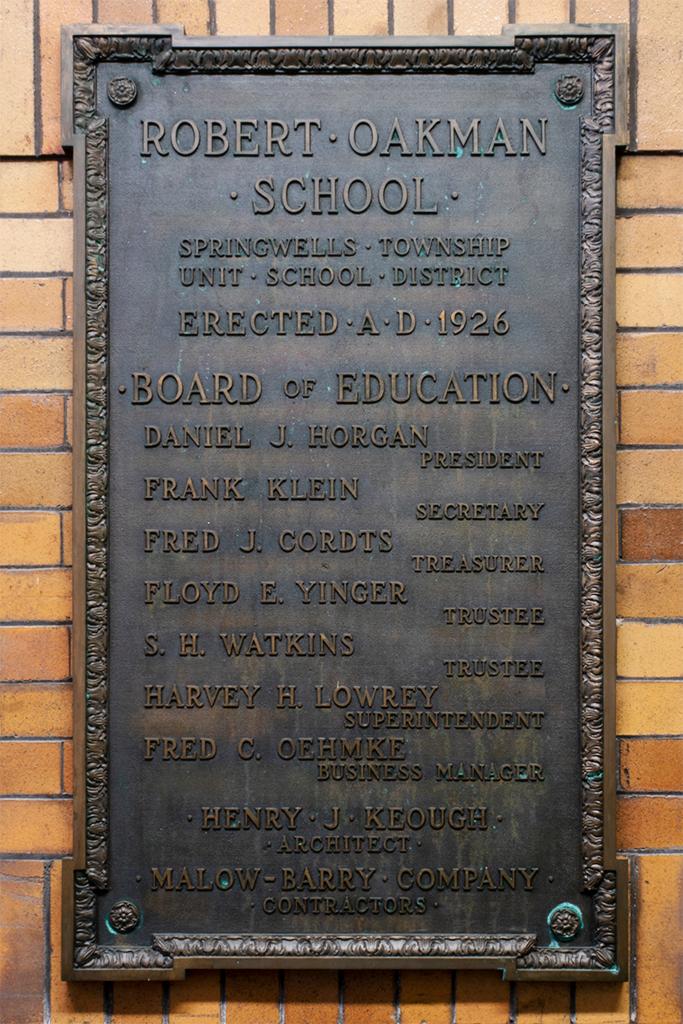