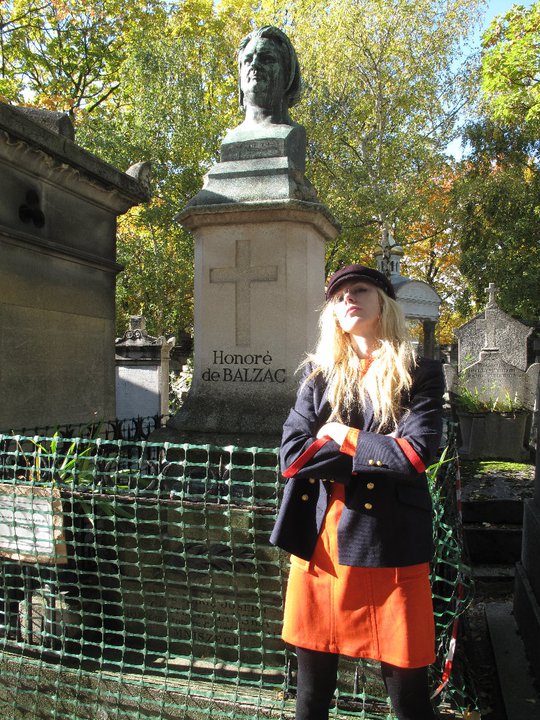 “These shores of the unknown, sands shivering with anguish or anticipation, are fringed with the very substance of our minds.”
–Louis Aragon, Paris Peasant

A flânuer of the graveyard and tomb is a modern spirit-walker wandering in a silent city of small temples, memorials, altars, and stone seraphim. Names, epitaphs, symbols, and photos are carved or set into marble and quartz, where melancholic parks were made for quiet reflection — connecting us to nature and the past.

Inside the Cleveland Museum of Art stands an Egyptian sarcophagus known as the Coffin of Bakenmut –one of the ancient world’s best preserved wooden coffins. Every inch is illuminated with hand-painted designs and stories depicting magical prayers, talismans and rituals from The Egyptian Book of the Dead — a dense collage of images depicting a journey into the afterlife. The visual incantations bring protection and instruction for the departing spirit: a guide map for joining the gods on a final voyage across the heavens. 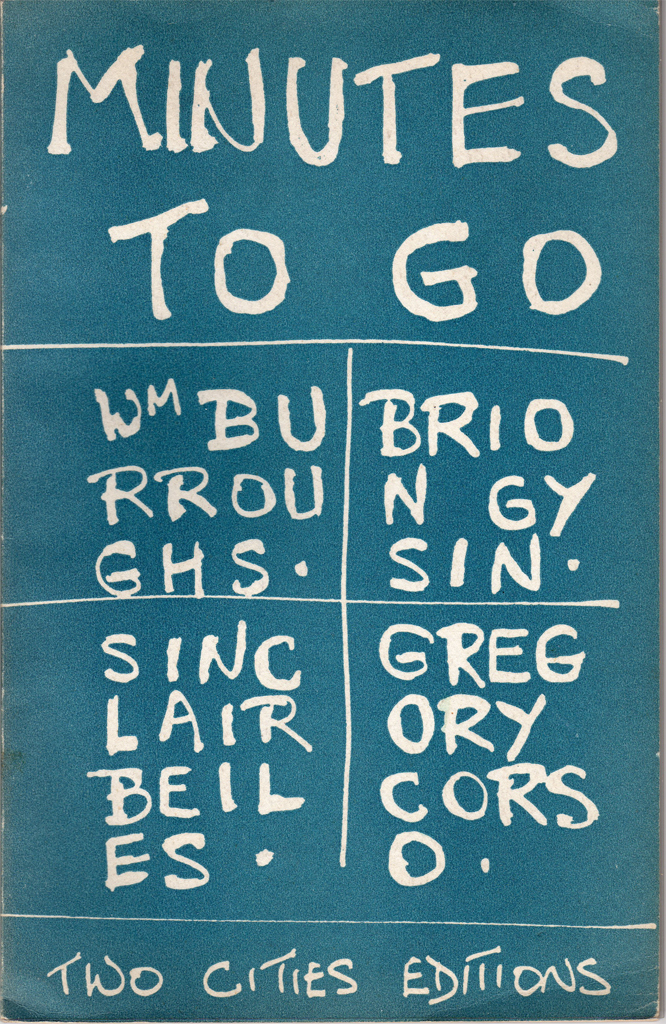 “Tzara did it all before.” –Gregory Corso, Minutes To Go

Cities of the Red Night introduces virus B-23, a virus that mutates after a meteor strike in Siberia, destroying 800 square miles of forest and causing the ‘Red Night syndrome’: a souped-up radioactive virus that increases sexual desire (among other side effects) and that eventually eliminates humankind.

It is the human virus. After many thousands of years of more of less benign coexistence, it is now once again on the verge of malignant mutation.” — Wm. S. Burroughs, Cities of the Red Night

Inspired by Norman Mailer’s hypnotic bestseller Ancient Evenings, Burroughs invokes Egyptian deities throughout the final trilogy volume: The Western Lands — a title named after the Egyptian land of the dead.

Burroughs’ use of cut-ups from Naked Lunch to his word-virus trilogy, were admittedly lifted from his life-long co-conspirator Brion Gysin (1916-1986): novelist, visual artist, and inventor of the Dream Machine.

In the early 1970s, Burroughs and Gysin collaborated on The Third Mind, a manifesto of cut-up techniques. A 2010 exhibition: Byron Gysin: Dream Machine, showed the history of their collaborations at the New Museum. In this short interview with Laura Hoptman, the exhibition’s curator, she explains the Burroughs/Gysin experiments and their lifelong relationship.

Gysin described his high-energy calligraphy as “the writing of silence”. It was partly based on his study of Arabic, his experience of living in Morocco, and a mystical image-language of his own invention. Gysin’s last artworks were the fiery oversized pages of Calligraffiti(1985) — a giant 55′ screen “based upon the Japanese foldout makemono” — created a year before his death and exhibited for the first time in 2005 at October Gallery, London.

Performance artist and musician Genesis P-Orridge was a longtime acolyte and collaborator of Burroughs and Gysin. In 2018, he combined a series of essays with interviews he did with Gysin from the 1980s. One essay in Brion Gysin: His Name Was Master describes GP-O’s adventures with Antony Balch’s film archive which he helped rescue and restore as Towers Open Fire. This underground cut-up film stars William Burroughs acting out a few of his own Naked Lunch routines; “We have nothing else so revealing,” writes P-Orridge, “so experimental, so influential, or so critically vital in preserving such important ‘Beat’ figures and their unfolding, most radical ideas on film.”

The roots of the literary cut-up technique go back to the complex Hungarian poet, radical activist, and DADA founder Tristan Tzara (1896-1963). A fact made clear in The Third Mind, and in Burroughs’ 1961 essay: The Cut-Up Method of Brion Gysin.

Tzara’s statement/poem on the cut-up: HOW TO MAKE A DADAIST POEM (1920) was first published in Dada Manifesto: On Feeble Love And Bitter Love of Dada. The City Museum of Strasbourg exhibition Tristan Tzara, poet, art writer, collector: The Approximate Man, was the first ever devoted to Tzara, a seminal figure of 20th century art.

In this short film poet Andre Codresceau reads an excerpt from Tzara’s Dada Manifesto of 1918, “The Bomb” — followed by scholars William Camfield and Marc Dachy, who discuss its impact on the Avant Garde.

The Muse of Memory

There’s no need to build a labyrinth when the entire universe is one.
— Jorge Luis Borges, The Aleph (1949)

65 feet beneath Paris are 186 miles of catacombs, home to an estimated 6-7 million dead Parisians. Near the time of the French Revolution in 1780, the cemeteries above ground were becoming an overpopulation and health problem and it was decided to move the bones underground, some going back 1200 years.

The catacombs were created out of web-like tunnels made from mining limestone quarry pits underground, which created the buildings of Paris, and what gives them their distinctive colors. A small portion of the catacombs are still open to tourists.

A network of tunnels are described as a labyrinth of secret rooms and burial pits, with names like: “The Room of Cubes. The Boutique of Psychosis. Crossroads of the Dead. The Medusa. Bunker Under the Mountain. Room Z.” An invisible city explored by urban spelunkers from an article in The New Yorker.

The Neo-Gothic tree-lined Père Lachaise Cemetery in Paris, opened in 1804, and with around two million visitors annually is the most popular necropolis in the world.

The 12th century remains of the world’s most famous student and teacher lovers; Héloïse d’Argenteuil and Pierre Abélard were reunited during a chapel ceremony at Père Lachaise in 1817. Their sad story was told from their own love letters, and later in the poetry of Alexander Pope (1717) and Christina Rossetti (1858). 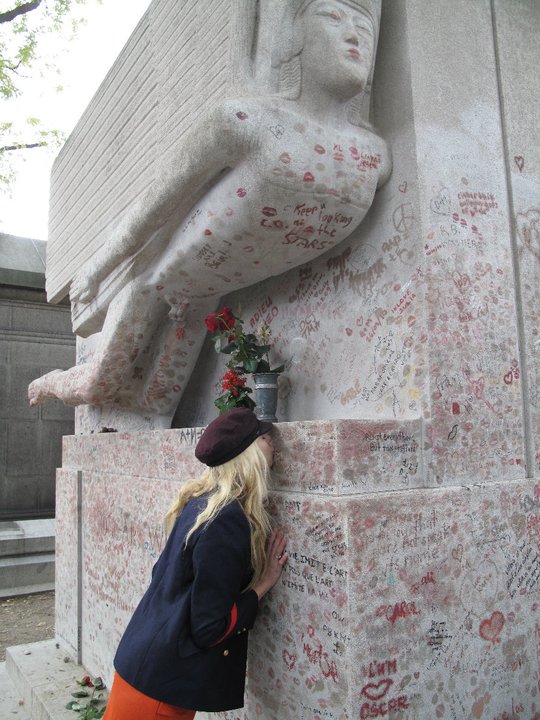 Père Lachaise is also home to Oscar Wilde (1854-1900), who resides there in an Egyptian/cubist tomb designed by sculptor Jacob Epstein — a design inspired by Wilde’s poem The Sphinx.

A plexiglass fence was recently built around the site because of the vast amount of lipstick kisses from Wilde’s adoring fans. An inscription on the tomb is taken from Wilde’s poem: The Ballad of Reading Gaol:

“And alien tears will fill for him
Pity’s long-broken urn
For his mourners will be outcast men
And outcasts always mourn.”

Author Will Self wrote about the tomb’s desecration for The New Statesman in Where the Wilde Thing’s Are. Self also writes on the mystery of the floating figure’s silver penis, which was smashed off and went missing soon after its unveiling. 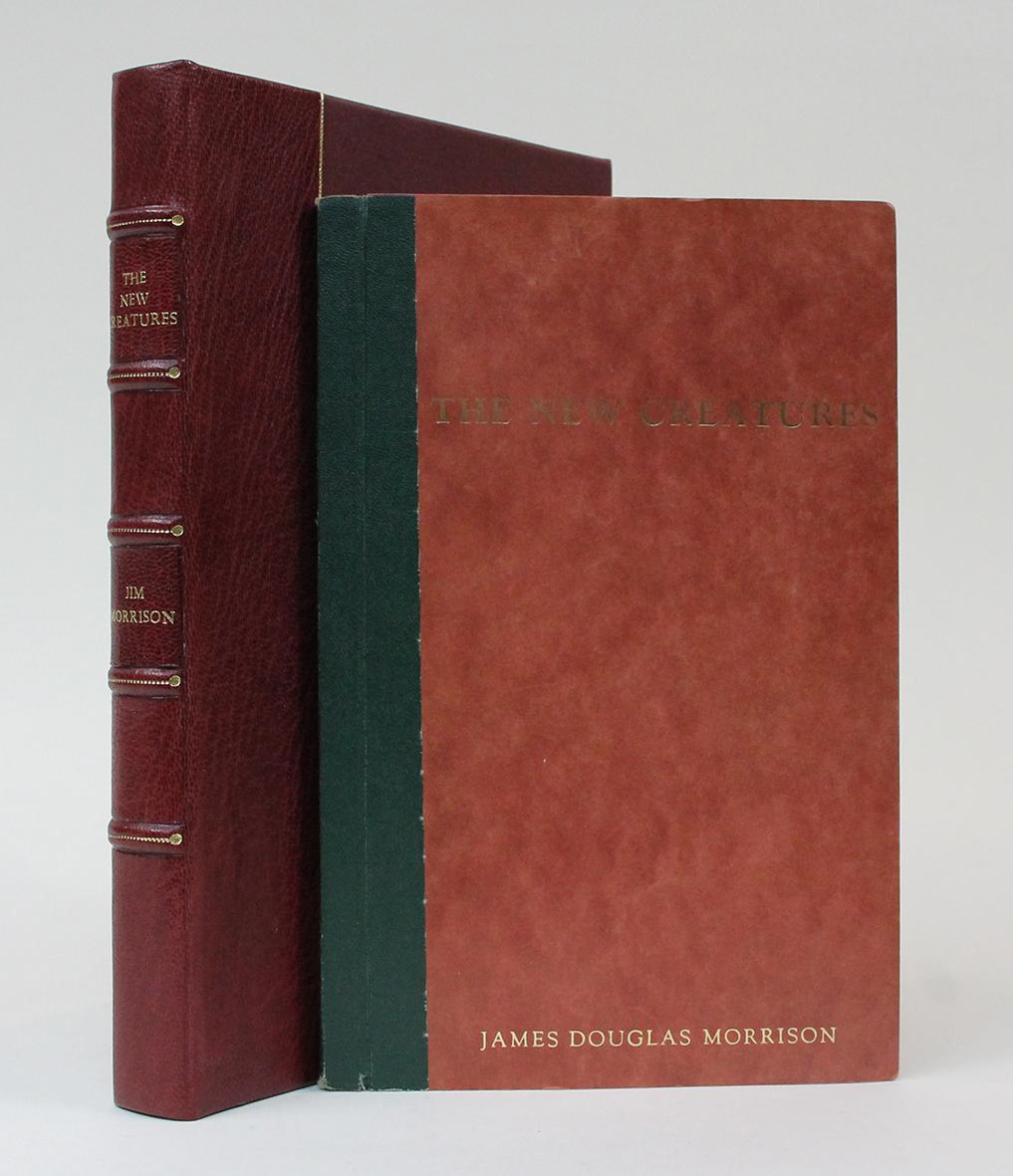 A first edition of The New Creatures, 1969

Poet Jim Morrison (1943-1971) has a gravesite also fenced off due to fanatical fans. Morrison zelot’s have stolen his portrait bust, chipped away at the headstone, and desecrated the site in various ways. A timeline of changes made to the grave includes video of former Doors members Robbie Kreiger and Ray Manzarek burning incense over the grave while paying a visit.

Morrison’s poetry collection The Lords and The New Creatures, were originally self-published in 1969, as two separate editions of 100 copies. A trade edition published by Simon & Schuster has remained in print since 1970. Two additional poetry and lyric collections: Wilderness (1989) and The American Night (1991) have remained in print.

This live version of the Doors signature epic The End, was filmed at the Hollywood Bowl in 1968. Morrison couples the dark mood with satirical improvised lyrics. 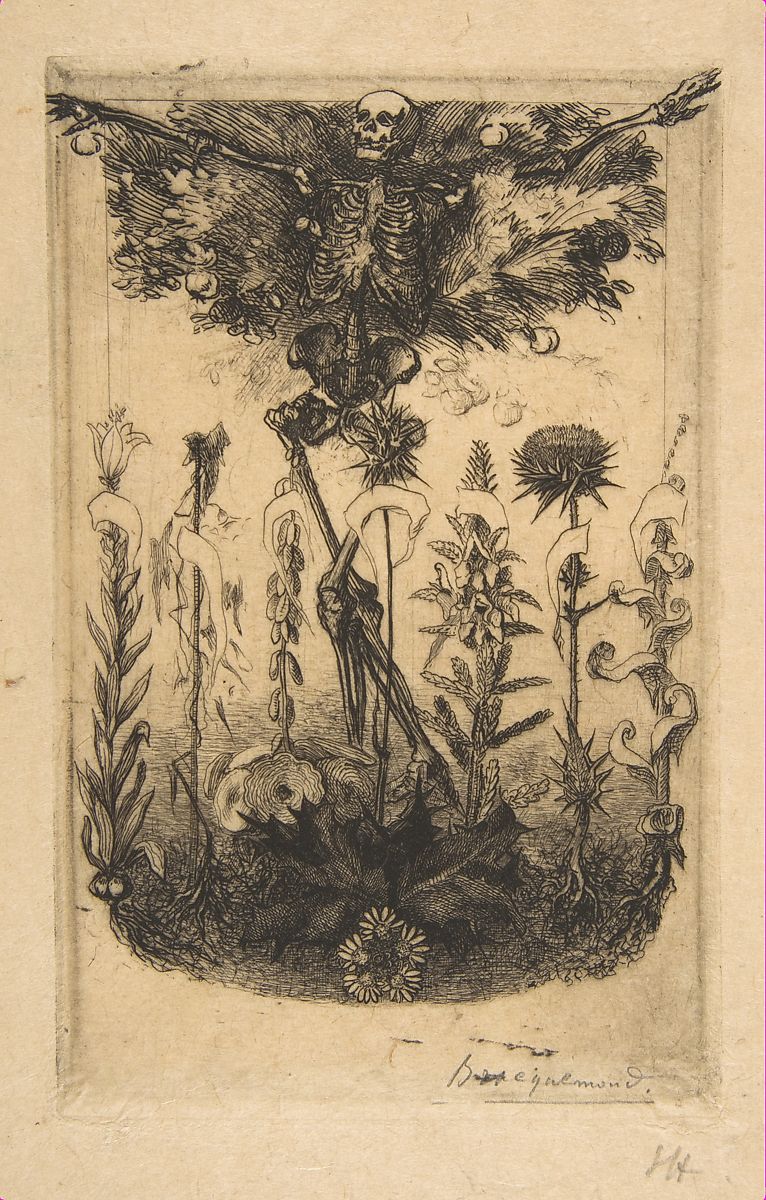 The grave of poet and art critic Charles Baudelaire (1821-1867) is located in Paris at the Montparnasse Cemetery. Baudelaire was the first author to write on the concept of the flânuer and the city as a site for aesthetic investigation in The Painter and Modern Life.

Walter Benjamin in his Arcades Project and in several other essays renewed Baudelaire’s investigation of the city by using new ways of observing the world through fragments, associations and wandering. Louis Aragon’s tour of the city:Paris Peasant, was another influence on Benjamin, who explored the vanishing glass and steel arcade malls as cultural gathering places. André Breton described Paris Peasant as, “Intoxicating reveries about a sort of secret life of the city.”

The final poem from Baudelaire’s prose-poem masterwork Flowers of Evil, is The Voyage with its reflections on the passage of time, traveling, and death. It begins:

“For the child, in love with globe, and stamps,
the universe equals his vast appetite.
Ah! How great the world is in the light of the lamps!
In the eyes of memory, how small and slight!”

The Tomb of Charles Baudelaire is a memorial to Baudelaire written by poet Stéphan Mallarmé. Mallarmé’s own life came apart with the death of his eight-year-old son Anatole, which inspired his great unfinished poem: A Tomb for Anatole. In an earlier elegy; The Tomb for Edgar Poe, Mallarmé honors Poe, whose work became a seminal foundation to French symbolism, after it was translated into French by Baudelaire.

‘To renew your heart, swim towards your Electra!’
— Charles Baudelaire, The Voyage