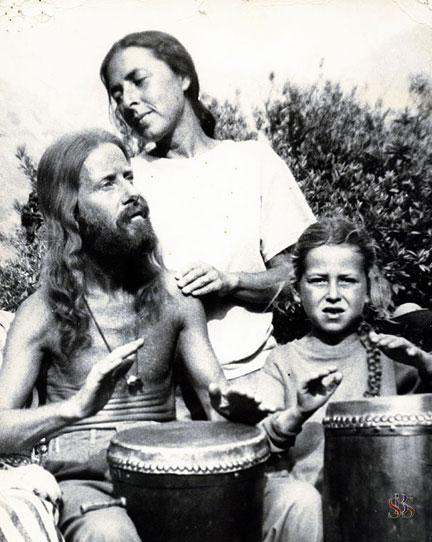 He was a strange looking man for the late 1940’s, with long blond hair and a long beard, dressed like a mystic. eden ahbez susposedly walked up to Nat King Cole’s manager outside a theatre in Los Angeles and gave him a soiled manuscript with the song Nature Boy written on it, (as well as two other songs, I’m a Real Gone Yogi and Pogo Stick Bounce.) Nat King Cole saw the songs and decided to add Nature Boy to the group’s repetoire. He liked it so much he recorded it, and it became the b-side of a single released by Capital Records. Nature Boy soon reached #1 on the Billboard Charts, and stayed there for seven weeks.

Before the song was released, it was relized that nobody had secured the publishing rights. Suposedly, Cole’s manager found him sleeping under the first “L” of the Hollywood sign. Because of the popularity of the song, eden ahbez became a minor Hollywood celebrity. He appeared on a few television shows, including a trip in 1948 to New York to be on a CBS program called “We the People.” ahbez, or ahbe, as he was called, tells the host that the song Nature Boy is the story of his life,

“I was born with a love of nature, and the desire to find God. Finally I came to look upon nature as a great symphany, and love as the theme of that symphany. And suddenly one day a melody just started singing inside of me.”

Unfortunately, he may have had a very deep memory for melodies, because the melody of Nature Boy was close enough to the previously recorded Yiddish song, Schwieg Mein Hertz, that he had to settle out of court with the publishers.

It’s unknown what financial effects this had on him. Ahbez had susposedly given portions of the publishing rights of the song to a few different people. Perhaps he didn’t really care about the money. In the same television show appearance, he told the host that money wouldn’t change the way he lived his life, that he and Anna slept on the ground in the mountains of California. When asked where he was staying in New York, ahbez said, “In the best hotel in the city, Central Park.”

All he wanted was a jeep, to get closer to nature with, and get back to California and Anna. There doesn’t seem to be that much information about this strange mystic. He was a vegetarian, and studied oriental thought and, along with his family, lived outside. There are photos of him with Beach Boy Brian Wilson and recordings of Nature Boy done by everyone from John Coltrane to Frank Sinatra and Grace Slick. Nature Boy continues to be a well-known and loved song, despite Celine Dion and Cher. He died in 1995, at the age of 87, sadly the man who gave the world Nature Boy died after being hit by a car.

Rare photos and video of Ahbez at: Rare Photos in the Shadow Box