“The Medium is the Mess.” â€“ Abbie Hoffman, Woodstock Nation

One of the most incendiary and provocative books to land after the end of the 1960s was Guitar Army. I remember discovering this strange collection of rants, Maoist tirades, and political-cultural detritus a bit heavy handed and over-the-top, but also exciting and necessary, a vital blood energizer — a survival manual for theÂ  suburban wasteland and antidote for mediocrity. As the sixties receded into the past like a spectacular setting sun, Guitar Army was a sweet refrain, its lovely rainbow-colored pages, organicÂ  Â  design and dense photographic interior made it an eye-popping object of psychedelic intensity.

It was also dangerous and obscene, potent and totemic, a dynamite infused counter-culture guidebook. Guitar Army fit snuggly alongside the Yippie productions Revolution For the Hell of It, Woodstock Nation (Abbie Hoffman) and Do It! (Jerry Rubin) — a literary triumvirate of manuals in the art of freedom, political action and cultural awareness. These books spoke of uprisings, the failures of capitalism, imperialism, greed and more importantly, the changes in consciousness happening across America and the world. These were also beautifully explosively designed and dynamic books, loaded with graphics, colored papers and photographs.

Jerry and Abbie were both co-founders of the Youth International Party â€“ a kind of Marx brothers political party meetsÂ  theatrical monkey-wrench outfit. They used the tactics of Lenny Bruce and puppet street theater. The Yippies threw a thousand dollars in singles onto the New York Stock Exchange from the balcony, a famous stunt that almost started a riot. The Yippies ‘raised’ the Pentagon in an exorcism event, and ran Pigasus the pig for president. Their flag was a red star on a black background with a marijuana leaf in the middle. Abbie & Jerry both took part in the notorious â€œChicago Sevenâ€ conspiracy trial in 1969, a trial accusing them of inciting riots at the Chicago 1968 Democratic National Convention. The trial itself was a farsical stage set, where the Yippie performance was reported on daily by the media. The Yippie’s often used humor to thwart injustice and help bring an end to the war in Viet Nam.
At the Woodstock festival, Abbie Hoffman interrupted the Whoâ€™s performance to speak out about the incarceration of John Sinclair. Hoffman grabbed the microphone and shouted “I think this is a pile of shit! While John Sinclair rots in prison. . .” Pete Townsend, the Whoâ€™s guitarist cuts him off mid-sentence, shouting, “Fuck off! Fuck off my fucking stage!” He was then unkindly conked on the head by Townsendâ€™s solid-body guitar and sent falling off-stage. The entire incident can be heard on the Whoâ€™s massive boxed set Thirty Years of Maximum R&B, (disc 2, track 20, â€œAbbie Hoffman Incidentâ€). 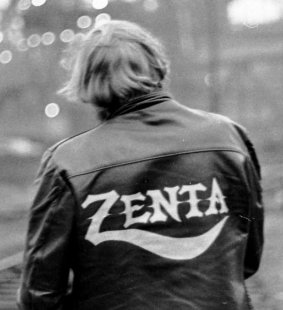 The White Panthers and Rainbow Peoples Party were the Midwestern correlation of the Yippies. They were youth movements that grew out of the Detroit Artists Workshop in 1964, an inter-racial, communal network of artists, poets and musicians. As Sinclair sat in prison for passing two joints to an undercover narc, plans were being made to unite the various ‘tribes’ into one cohesive unit. Letters and arguments began to fly between Hoffman and Sinclair on how to organize, and what to name this new ‘Woodstock Nation’… a plan too futuristic or ill-fated from the start.
Guitar Army grew from the writings Sinclair made while in prison, yet it covers this tense and distorted time-period where the ‘love-generation’ turns ghastly and hard drugs began to spread. Sinclair saw it all coming down from behind bars. Guitar Army was a shot fired across the abysmal chasm growing between rock star celebrity bullshit and their proletarian audience, feeding their indulgent fantasies. Death to Death Drugs! Life to Life Culture! Rainbow Power!! John’s voice was an unheard cry. He spoke out to the rampant hypocrisy and its sell-out misanthropic nature. It was the end of the sixties and it got ugly and real, fast.

you got to
live it not just
say it or

play it thatâ€™s what this
all
about
-John Sinclair, Bridgework IV:1965

The new edition of Guitar Army lacks the rainbow colored pages and the passionate psychedelic design work of Gary Grimshaw, but it still packs a wallop. There are added images of the MC5 and the â€˜tribal sceneâ€™ plus a fabulous bonus CD that includes some of the revolutionary minstrels and poets; MC5, Up, Allen Ginsberg, James Semark, bands and messages from the White Panther Party still rip it up. The same text remains; disjointed, freaky, high energy rant and roll, part free jazz, part punk rock, and its total John Sinclair, his blood and matter are soaked into the pages. This is a reality rarely seen today. Raw truth. Anyone reading this today will sense the poetry, rhythm and humor within. Sinclair and the White Panthers had much in common with the Yippies. There warnings were of a spiritual nature, they stood for and were persecuted for the freedom of us all. Guitar Army has returned, raw and complete, in all its beautiful and demented glory, and its none too late, to inflame and inspire new generations â€“ a message we need most desperately.Â  Kafka said, “a book must be an axe to open the frozen sea inside of us.” Here it is, let it alter your mind and free your soul. Pass it on.
Afterwards: In 1994, Jerry Rubin died in Los Angeles while jaywalking on Wilshire Blvd. Abbie Hoffman died in 1989 from an apparent overdose. John Sinclair is a free man and travels the bardic way, reading poetry & podcasting his travels between Amsterdam, Detroit and New Orleans.

ON THE ROAD WITH JOHN SINCLAIR

John will appear at a reading & autograph party with WPP co-founder Pun Plamondon at the Book Beat on Thursday, May 3rd at 7 PM. Buy an advanced signed copy now of the new GUITAR ARMY. It will ship on May 4th, 2007.